The world is currently facing the most serious existential threat in the history of humanity. The nuclear power Russia, which has some 6,000 nuclear warheads in its arsenal, is openly threatening to use nuclear weapons if "anyone thinks of interfering and disrupting its strategic plans".
06.05.2022. BLBens Latkovskis 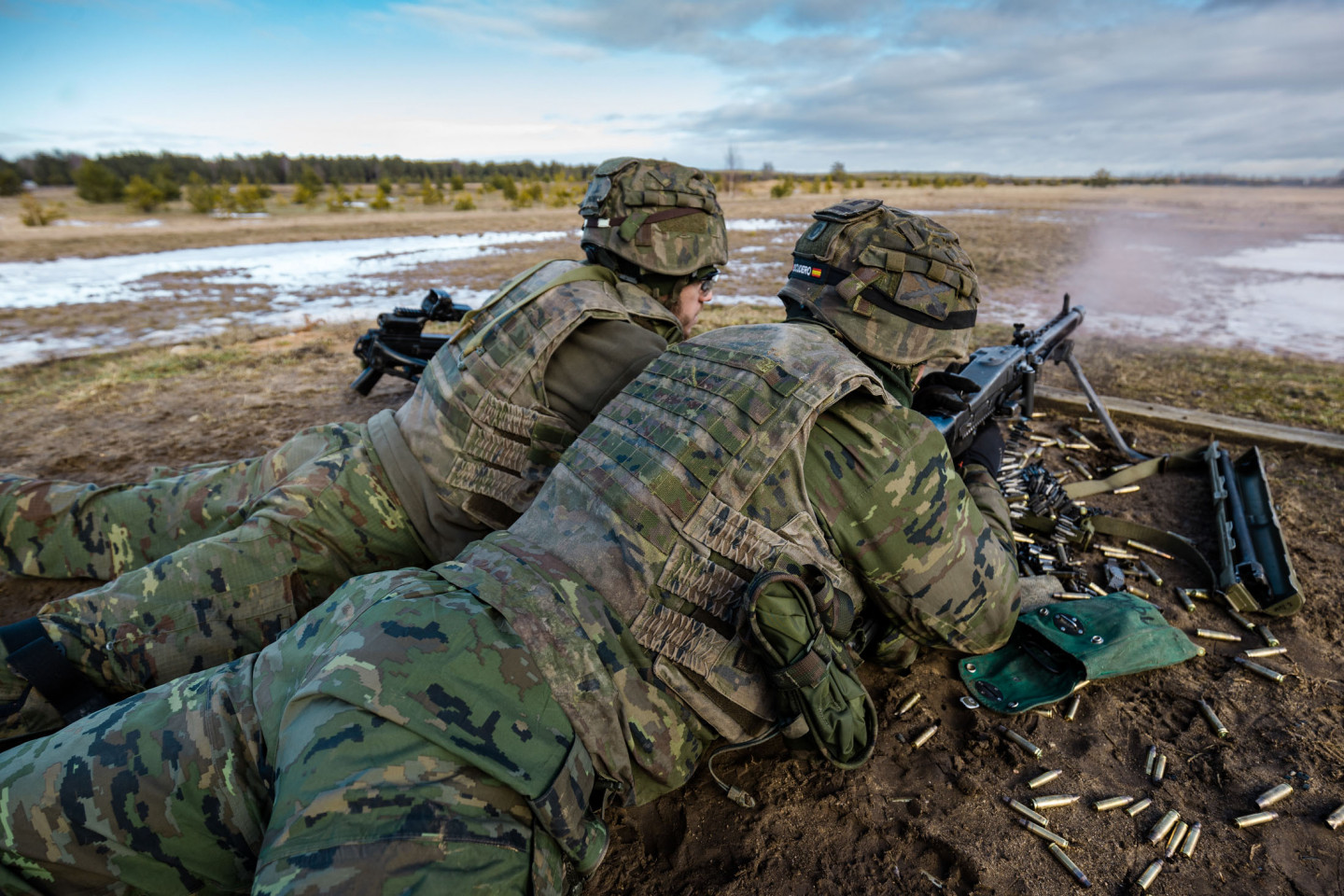 Weapons training is essential to maintaining readiness and is a regular part of the exercise calendar at Camp Ādaži, the battlegroup’s home in Latvia. Spanish soldiers during weapons training at the Ādaži training ground in Latvia ©www.nato.int/cps/en/natohq/photos_195011.htm

Although most experts try to reassure the people by telling them that this is just Putin's desperate bluff, these words of reassurance do not sound convincing. If only because the same experts, before the Russian invasion of Ukraine, were just as confident that there would be no invasion because "what good would it do to Putin". After all, he is not going to shoot himself in the foot. Now it turns out that he will, and the word "experts" should be put in quotation marks.

It is common to believe that the life strategy characterized by the Russian word "авось" (hopefully) is typical of Russian culture, but it is calling the wish a reality. The reliance on "it's hopefully not going to happen anyway, so there's nothing to worry about" is not unique to Russians. Unfortunately, there are several signs that the basic strategy of even an organization as serious as NATO is the same dubious "hopefully". What makes me say these harsh words?

There is no clear answer to the question of what NATO will do if Russia uses weapons of mass destruction. No one has the answer. Not the US President, not the NATO Secretary General. We could make the excuse, from the point of view of the "common man", that the plan of action in such a situation is probably secret and "they [NATO generals and presidents] will know what to do". But this is also typical wishful thinking. There is no plan. Neither secret nor open. This was made clear at the "Priorities for the NATO Summit [in Madrid] and security in Europe" conference just held by the Atlantic Council.

The US Assistant Secretary of Defense Celeste Wallander was forced to remind the audience that the current NATO strategy is irretrievably outdated, having been approved in 2010, in a completely different era. This means that even after the 2014 annexation of Crimea, the hostilities in the Donbas and the downing of the Malaysian Boeing, there was no significant change in the world's perception of the leaders of NATO. Yes, there was the Wales Summit, decisions were taken on the rotation of certain NATO battalions in the Baltic States and Poland, but the strategic concept remained unchanged.

It is not certain that fundamental changes have taken place now. Even after February 24. At least at the bureaucratic level, everything seems to be business as usual. At that conference, former NATO Deputy Secretary General Alexander Vershbow outlined the preferred NATO strategy for the future: "The new Strategic Concept must take into account a range of new threats - systemic confrontation with China; the threat of terrorism in the Middle East; climate change, cyber-attacks, new pandemics. NATO needs to renew its responses to all these challenges, with additional priorities - the stability of the Alliance and the stability of our societies and their democratic institutions."

This new concept is fully in line with the characteristic of our times: the focus is not on fighting the biggest real threat, but on fighting what is easiest and most pleasant to "fight". This is then declared to be the main enemy. The result: Putin threatens us with the atomic bomb and we respond with the green course and the fight against climate change. What is Putin with his 6,000 nuclear warheads against a Middle Eastern terrorist with an explosive belt? In other words, we are not going to change our strategy much, because "Putin is not going to shoot himself in the foot." After all, he also wants to live.

To be fair, the Russian factor was invoked often enough at that conference, but only in general terms and in wishful terms. General James Cartwright, former Deputy Chairman of the US Joint Chiefs of Staff, pointed out the main concern: "NATO and America need to think about security long before a potential conflict. When conflict breaks out, the preconditions must be such that Western leaders have a much wider range of tools at their fingertips than just weapons." Touching on the Russian threat to use nuclear weapons, Cartwright noted, "Russia played the nuclear card early because it is effectively up against the wall and standing there, but that is not the best place for a nuclear power. If this nuclear card is played, any president of a country opposing the aggressor will find himself in a difficult situation."

General Philip Breedlove, former Supreme Allied Commander Europe of NATO Allied Command Operations, made a similar point: "We need clarity on what we will do if Putin uses nuclear, chemical or bacteriological weapons. We need to prepare for any development well in advance, not just after it has happened."

Very wise words, but they clearly show that no serious preparation for "any development" has taken place so far. There has been a reliance on the supposedly exclusively Russian characteristic that it hopefully will not happen. Unfortunately, this "strategy" allows Putin to hope that the West will be frightened and will not be able to respond adequately to the serious intentions of a nuclear strike demonstration.

Does such uncertainty enhance world security? I do not think so.