LKS party members about the Ukrainian flag: "Let's step away from that shit"

Members of the ultra-radical political organization Latvian Russian Union (Latvijas Krievu savienība) warmly greeted each other on May 1 and 9, adorning themselves with orange-black ribbons, sickles, hammers, the letter Z and other banned symbols. They have also come out with the announcement that the Soviet victory has saved the Latvian people from slavery. Basically, this is a denial of the crimes committed by the Communist regime, which is a criminal act.
10.05.2022. Imants Vīksne 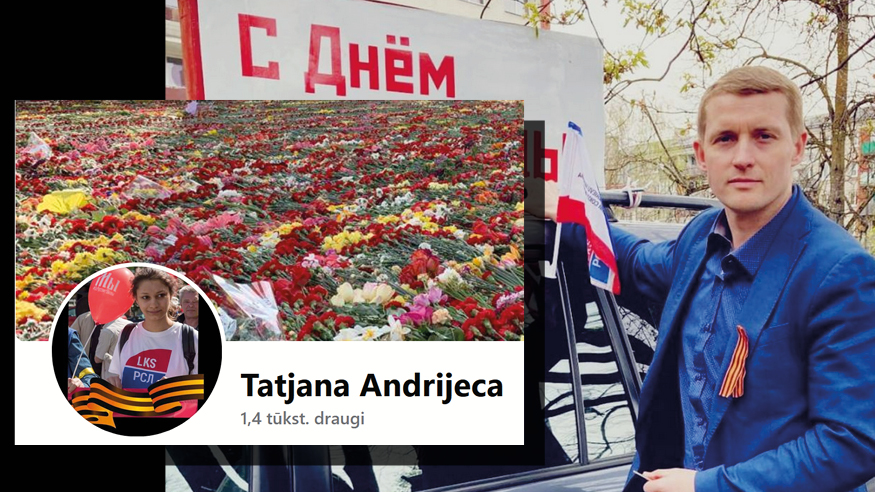 The organization has already been warned by the State Security Service for similar utterances and is one step away from being forcefully disbanded. The party is now going to the max just to fulfill the task given to it by Moscow - to rock the situation in Latvia as much as possible. May 9 was declared by special law this year as a day of remembrance for the victims and the fallen in Ukraine. But the pro-Kremlin Latvian Russian Union has continued to agitate for people to come to the "Victory" celebrations in order to demonstrate the unity of the Russian world. And here is a quote from their statement:

"Post-war generations of Europeans are, in a significant way, the children of the same Victory. Without it, Slavic people would expect the fate of European Judaism, and the Latvian people - slavery."

Basically, this sentence denies the occupation of Latvia and the enslavement of the Latvian people for 50 years. And this is being done by an officially registered political party, with representation in the Riga City Council and the European Parliament.

The party's employer in Moscow

The State Security Service reports on the Latvian Russian Union's anti-state activities and cooperation with Moscow every year, and this is no exception:

"As in previous years, last year the most active role in defending the rights of 'compatriots' in Latvia was taken by the political party Latvian Russian Union, which tried to position itself as the central and only political force working in the field of defending the rights and interests of these persons in Latvia and actively cooperating with Russian officials. In its public manifestations, the LKS sought to highlight alleged violations of Russian rights in Latvia, as well as to discredit the decisions of Latvian state institutions and government." This is according to the 2021 report, but this year, with Russia's large-scale invasion of Ukraine, the party's pro-Kremlin stance has become even more apparent. Night-time vigils at Soviet monuments, unequivocal support for the actions of the Russian Federation - in writings published by party members. On May 1, when some uninvited guests arrived at the party's red-flag-adorned event in Lucavsala with one Latvian and one Ukrainian flag, the assembled party members - and among them MP Tatjana Ždanoka - were urged: "Let's step away from that shit!"

The new kremlinites have been found

The party has already been warned by the State Security Service against committing offences against or harmful to national security. But the party does not react to the warning, and its members celebrate the "liberation" of Latvia and Russia's invasion of Ukraine on May 9.

It is noteworthy that this openly pro-Kremlin action of the party against the backdrop of war coincides with the emergence of new leaders. The State Security Service reports:

"In 2021, the Russian institutions and officials responsible for the 'compatriots' policy continued their desperate efforts to find new leaders to implement the tasks of the 'compatriots' policy. According to the information available to the State Security Service, representatives of the Russian Ministry of Foreign Affairs have expressed their dissatisfaction that the 'compatriots' gatherings in Russia have been attended mainly by activists of the older generation from Latvia, who see in this cooperation opportunities to gain financial resources, but whose influence on the social and political processes in Latvia has always been insignificant."

To stop them from provoking the people

Tatjana Andrijeca, a member of the party's council and chief rapporteur of the Riga City Council faction, spoke on behalf of the party. She is the one who called for at least 100,000 supporters to turn up on May 9 at the demolishable monument for "Soviet Soldiers - Liberators of Soviet Latvia and Riga from the German Fascist Invaders", not to mourn the Ukrainians killed and wounded by Russia, but to "hold the monument". She heads an unregistered sub-structure of the party, the "Youth Council of Russian Compatriots in Latvia". She is listed in the myrotvorets.team catalogue of the enemies of Ukraine in Latvia, created by the МИРОТВОРЕЦЬ movement. Another less publicly known party member who is currently agitating followers against the demolition of Soviet monuments is Andrejs Pagors, a member of the Jelgava City Council. He preaches to his followers: "We are many and we will win."

At a time when the people of Ukraine are being slaughtered by the likeminded friends of the Latvian Russian Union, the Latvian political community must ensure that these "victors", deniers of the occupation of Latvia and supporters of Russia's aggressive war disappear from the political scene permanently and, preferably, together with the monument to the "Soviet Soldiers - Liberators of Soviet Latvia and Riga from the German Fascist Invaders". To stop them from provoking the people.