The systematic donation of Covid-19 vaccines to third countries suggests excessive purchases of vaccines, basically scattering public money to the winds. Neither the Minister of Health Daniels Pavļuts nor the Director of the Pharmaceutical Department of the Ministry of Health (MoH) Inese Kaupere have yet been held accountable for the waste of this money.
10.05.2022. NNeatkarīgā 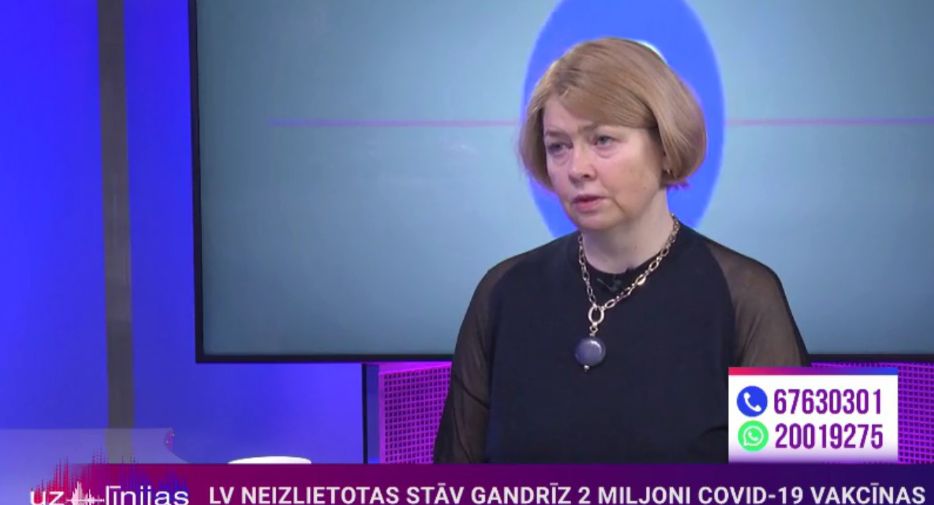 Inese Kaupere, Director of the Pharmaceutical Division of the Ministry of Health, proudly tells the media about the large purchases of vaccines, the surplus of vaccines, their donation to third countries and at the same time complains about the lack of money for the purchase of medicines to treat other serious diseases ©ekrānšāviņš no raidījuma “Uz līnijas” TV24

On May 3, a report from the Ministry of Health, which was also reproduced by LETA news agency, said that Latvia would donate €16.6 million worth of Covid-19 vaccines to Nicaragua - 849,420 doses of the Comirnaty vaccine. The total value of the donated doses of Covid-19 vaccines is €16,563,690. According to LETA, "Latvia has so far donated around one million vaccines to Tunisia, Moldova, Albania, Kenya, Georgia, Vietnam, Egypt and Benin, as well as donated vaccines to the COVAX mechanism."

A signal from the State Audit Office

The audit report of the State Audit Office (SAO), published at the beginning of the year, including on vaccine procurement and its use, signaled that the MoH had failed to implement the procurement of Covid-19 vaccines in line with real needs.

By examining vaccine purchases over a relatively small time span, the SAO found that "the MoH's vaccine stock management does not provide complete information on vaccine balances with vaccination providers and creates an administrative burden". As explained by Maija Āboliņa, Director of the SAO's Third Audit Department, "overall, in 2021, the vaccination process was characterized by a surplus of vaccines due to low public demand, resulting in a large number of vaccines being donated to non-EU countries, while the risk register focuses more on a situation of a surplus of vaccines rather than a shortage".

The SAO document concludes: "Although the Minister of Health has provided updates on the progress of vaccination at each Cabinet meeting since the beginning of 2021, in the auditors' assessment, the monitoring of the vaccination process would have been much better targeted if actual progress had been systematically compared with planned indicators - if these had been set. This would have provided a basis for decisions to react in a timely manner to deviations from the pre-agreed timetable and thus reduce the risk of not reaching the target."

The MoH Statute states that the Ministry of Health in the field of pharmaceuticals, for which Kaupere is responsible, "develops the national policy in the field of pharmaceuticals and legal circulation of narcotic and psychotropic substances and precursors; coordinates, analyses and makes proposals on the development of the system of reimbursement for medicines and rational use of the state budget funds for medicines; ensures quality and effective access of consumers to medicines and coordinates supervision of distribution of medicines", etc. In conclusion, according to the statutes, the Pharmaceutical Division should have been actively involved in the planning of acquisitions and forecasting the volume of vaccines required by the State.

Neither the MoH website nor the government meetings have revealed that anyone in authority has called for an investigation into the reasons for the excessive purchase of vaccines and sought to hold officials accountable. It should be noted that Kaupere has publicly admitted (on Doctus) that God is very important in her life, so these dealings seem particularly strange in the context of living according to the commandments. She has also said that pharmaceutics is a job with a "veil of secrecy", which is indeed consistent with the fact that vaccine spending is kept secret.

A system of excess

Although already at the end of 2021 the SAO found that the procurement of vaccines was excessive and does not fit real needs, as recently as February 23 this year TV3 News reported: "Last year Latvia received about 4.2 million doses of vaccines, more than half have been used so far, and the current remaining vaccines is 1.17 million doses. At the same time, it is planned to receive around four million more vaccines this year, but calculations already show that Latvia will not be able to use even half of this. In addition to the vaccines already known, Latvia will receive a new brand - Novavax - next week."

Kaupere: "At the moment, we are forecasting this surplus of vaccines by making these careful assessments, by calling in epidemiologists, by talking to our own experts, and by looking at real life and vaccine use."

After the media had raised the alarm about millions of vaccines being wasted and that our vaccines (the amount of which could have been estimated well in advance, according to population size) were not really needed even in the needy countries, the news followed on April 12 that Latvia would not sign up for Novavax vaccine deliveries in the third quarter of the year and that those received would be donated.

TV3 news pointed out that "in addition to the vaccines Latvia has applied to buy this year, it has also applied to buy Valnava and Sanofi brand vaccines, but these have not yet been registered in the European Union".

It is noteworthy that on April 6, Kaupere explained on TV24's "Uz līnijas": "I think that, given the current situation, we could now talk about donating vaccines. That would be the most realistic option." She said that Latvia has been donating vaccines to third countries from autumn 2021. At that time, total donations amounted to around €5 million, and along with aid to Nicaragua it is already more than €20 million. For comparison, here's the approved 2021 expenditure of the Kuldīga hospital of around €7.6 million. And while we are helping with our own money, which has been mismanaged by civil servants, to distant nations where few even know where Latvia is, dozens of seriously ill patients are asking on the portal ziedot.lv for help with treatment that is not covered by the state.

A feast in the time of plague

Kaupere admitted to the press that the surplus of vaccines had been predicted. It follows from her statements that the large purchases of surplus Covid-19 vaccines were made deliberately. At the same time, the official has spoken in the media about the fact that many patients in Latvia do not have access to medicines because they cannot buy them due to a lack of funds. On the website www.cistafibroze.lv, you can read the following statement by Kaupere: "Patients are waiting for medicines even 10-12 years, and our hearts ache too. We definitely need to talk about this. And the heart aches for all patients, not just for rare disease patients. Of course, it is a funding problem. Think about it: the oncology sector needs €35 million, but this year's budget allocates just over €1 million! What diagnoses can we even talk about? We do not see any light at the end of the tunnel. We are living in deficit all the time, and at the moment the deficit in the budget for reimbursable medicines is €10 million."

These statements are dated February 2021. This means that when planning the excessive purchases of Covid-19 vaccines, Kaupere knew perfectly well that in other areas of healthcare there is a shortage of medicines for patients because the State has no money to buy them.