In early May, it will be two years since Neatkarīgā was transformed from a printed newspaper into a high-quality digital daily. In that time, we have more than doubled the audience of Neatkarīgā. In March 2022, according to Google Analytics, 620,000 unique users visited Neatkarīgā alone.
11.05.2022. JPJuris Paiders 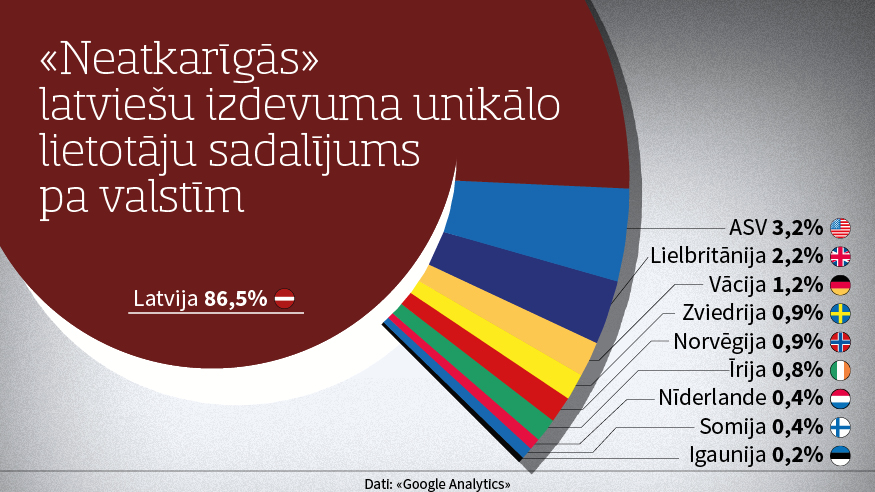 Unique users of the Latvian edition of Neatkarīgā by country ©Diagramma

It should be recalled that the number of unique users is actually the number of unique devices on which Neatkarīgā is read. The total number of readers is slightly lower because there are readers who use mobile phones, and also home or work computers. Each such device is counted as a unique user. The 620,000 unique users are only those who opened at least one article in Neatkarīgā. The combined audience of Neatkarīgā and nra.lv is considerably larger, as Neatkarīgā publishes commentaries, opinions, interviews, research and other articles with similar content, while nra.lv publishes a constant (24 hours a day) stream of the latest news.

One of the significant achievements of the last two years is that, by switching to a digital format, Neatkarīgā has gained a completely new audience - Latvian diaspora readers around the world, both those Latvians whose ancestors moved to other countries in the 19th and 20th century emigration waves, those Latvians who left Latvia during the economic difficulties at the beginning of the 21st century, as well as those who are abroad for study or work. Currently, 87% of all unique users who read Neatkarīgā come from Latvia, and 13% from abroad