The European edition of Novaya Gazeta, published in cooperation with the Rīgas Viļņi publishing house, has been published in Latvia since Friday. Novaya Gazeta, edited by Nobel laureate Dmitry Muratov, was forced to suspend its work in Russia after the country's war against Ukraine imposed impossible conditions on objective media work. These included the censors' demand not to call a spade a spade - not to call the war in Ukraine a war, but a "special military operation". It has become humiliating, unbearable and dangerous for the newspaper's journalists to be in Russia.
11.05.2022. MKMāris Krautmanis 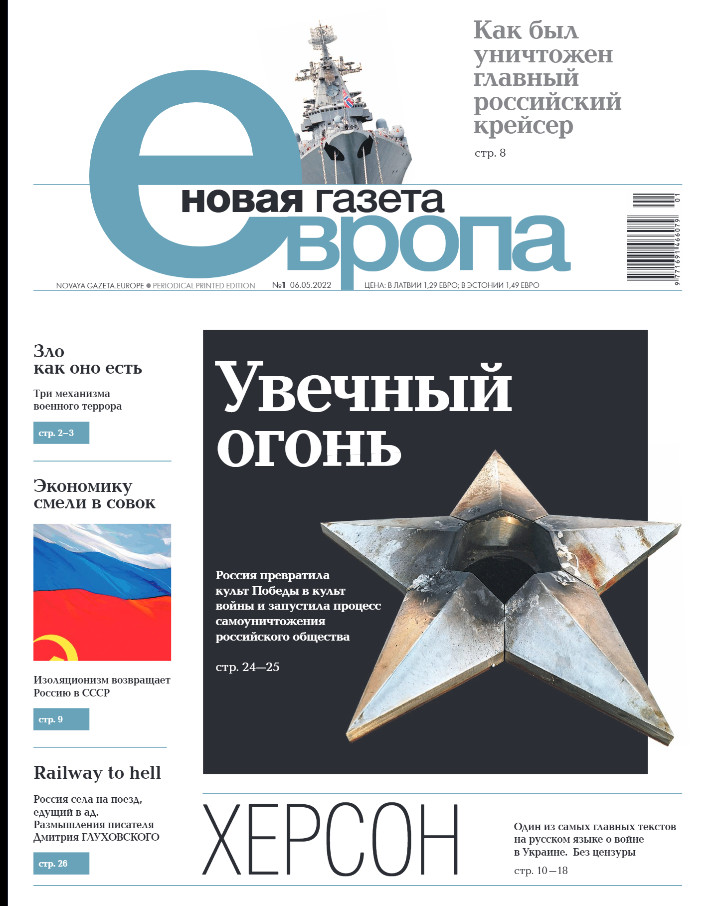 Novaya Gazeta was the last major newspaper in Russia that was still critical of Russian President Vladimir Putin and his policies. Other anti-Putin media - Ekho Moskvy, the television channel Dozhd - fell even before Novaya Gazeta.

At the end of March, Novaya Gazeta announced that it was suspending operations and would not be published in print or digital format until the end of the Russian-led war in Ukraine. The announcement followed another warning from Roskomnadzor, Russia's Federal Service for Supervision of Communications, Information Technology and Mass Media, which threatened to revoke the media outlet's license.

Novaya Gazeta's history has some enormous tragedies - six of its journalists were killed, all of them in the first years of Putin's presidency. The best known is Anna Politkovskaya, who was killed in 2006. Her main subject was Chechnya. When the first two Chechen wars took place, Novaya Gazeta did not support the official position of the Russian authorities and called for peace; it saw the wars as a tragedy, not a restoration of power or anything like that.

Now Novaya Gazeta has found a new home in Riga and will continue, within its means, to tell the world and Russia about the real events in Ukraine and to analyze what they mean. Kirill Martynov, editor-in-chief of Novaya Gazeta, does not think that Russian censorship will be able to cover the entire information space. Some of the truth will break out. There are digital opportunities for those who want to know more than just war propaganda in Russia. Novaya Gazeta still has a wide audience. He also said on the Internet platform DialogTV that it would take a lot of effort to ensure that the Russians of Latvia "are not handed over to Putin". Novaya Gazeta will also be published in Latvian.

In Latvia, the Riga-based internet media Meduza was already active long before the war in Ukraine. Meduza was founded in 2014 by Galina Timchenko, former editor-in-chief of the news website Lenta.ru, after she and most of its journalists left Lenta.ru when it came under the control of persons close to the Kremlin. Meduza loves criticizing the Putin regime. Galina Timchenko is reluctant to communicate with the local press, especially the Russian press, while Novaya Gazeta is open to all forms of cooperation.

Latvia has already become a kind of second home for the brilliant film director Vitaly Mansky.

There are also phenomena such as TV diva Ksenia Sobchak, who has just complimented the tasty snack Kārums and at the same time scolded Latvian journalist Henrieta Verhoustinska for being too nitpicky in her interview with Russian actress Chulpan Khamatova, who has become a member of the New Riga Theatre troupe. Sobchak came and went. It happens.

Latvia has emerged as a place where dissidents who are currently unable to live and work in Russia gather.

The entry of top-class journalists into the Latvian media environment is undoubtedly a positive phenomenon. It will also raise the creative quality bar for Latvian Russian media and for journalists writing and broadcasting in Latvian. Novaya Gazeta is a media outlet that is exceptionally accurate in facts and figures and deep in analysis. It will serve as an example.

Hopefully, the Latvian media will be too ashamed to spread propagandistic domestic politics and false news at a time when, right next door, Novaya Gazeta is doing nothing of the sort.

The Latvian political authorities and the bureaucracy that follows from them should support Russian anti-Putinist activities in Latvia with all their might, for both political and moral reasons. Unfortunately, the Latvian political elite looks at Russian dissidents with a sour face and does not support either the media from the neighboring country or the businessmen for whom life in Russia has become unbearable.