Large-scale provocations are expected in Riga today and tomorrow. Riots are possible.

This time the riots might be bigger than the 2009 Old Town riots. Calls are circulating in pro-Kremlin bubbles to mobilize against the Nazis and to protect the Pārdaugava monument. Unapproved rallies are expected not only today at the Town Hall, but also tomorrow in the vicinity of Victory Park. The organizational work to destabilize the situation in the country is mainly carried out by members of the extreme radical organization, the Latvian Russian Union (Latvijas Krievu savienība).
13.05.2022. Imants Vīksne 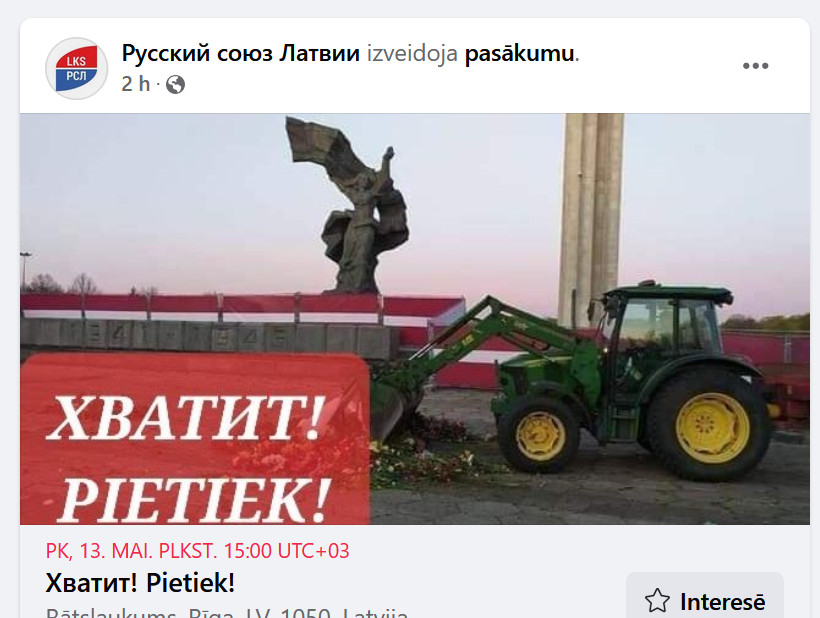 The security authorities have recommended to the Riga City Council not to approve the protest rally announced by the Latvian Russian Union, and the municipality has done so. But this time the aggressive supporters of Kremlin policy and war no longer care whether someone has banned or approved something. The pro-Kremlin Latvian Russian Union and its members are actively agitating on social media for mass defiance: "It's now or never! We can't allow Latvia to be irreversibly turned into a fascist state! We must stand together and show unprecedented unity and, if necessary, stand to the end for our monument to the Liberators!" This is how Tatjana Andrijeca, the new leader of this anti-state organization, is campaigning for this afternoon's illegal gathering. On May 9 she was detained for spreading leaflets, but was quickly released again. The old leaders are also campaigning. Miroslavs Mitrofanovs calls for a fight not for hundreds of Soviet monuments, but for bilingualism in education. Although essentially anti-state, these calls do not yet contain an element of violence. But more aggressive calls are also appearing on the web in Russian social bubbles. And not only about the gathering today at the Town Hall, but also at the monument in Pārdaugava on Saturday.

The orders are coming from Moscow

Perhaps this is the same tactic that has been used before - on May 9 we come for the official laying of flowers, and on May 10 we organize the real event. And the real one was organized from Moscow. Of course, removing the flowers with a tractor was a great excuse, but that was not the decisive factor. The situation in Latvia is being deliberately manipulated. The Kremlin's agents of influence in Latvia were set in motion through Dmitry Yermolaev, a former employee of the Embassy of the Russian Federation and an officer of the Russian Federation's intelligence service, and then a chain reaction took place on social networks through the Latvian Russian Union. And now there are messages with clear threats and calls for violence. During the Prime Minister's trip to Canada, his functions are currently being performed by the Minister of Defense Artis Pabriks. Yesterday, he said on state television that "at the moment in Latvia, there is no ethnic conflict between Latvians and Russians, but a political conflict between different world visions". But these visions speak two different languages. Calls for riots are disseminated in Russian, accompanied by aggressive messages that too few Latvians were sent to Siberia, that Russian special services will record anyone who donates to the demolition of the monument, and that after the Russian army comes, anyone who donated will be shot. Latvians are called bastards, Nazis, cowards and a variety of four-letter words.

The situation is explosive

The level of hatred in the pro-Kremlin part of society is unprecedented. It was felt first-hand by everyone who was wearing Latvian or Ukrainian symbols in the vicinity of Victory Park and the monument on May 9 and 10. Everyone who came by to lay down flowers spat on them, threatened, swore, and sneered demonstratively. Men, mothers with children, teenagers and pensioners - almost without exception. This raises fears that the provocations inspired by Moscow today, tomorrow and in the days to come could escalate into much more serious riots and a real threat to national security, which Russia can exploit for its own interests. It will not even be necessary to send in the little green men to provoke a civil war. After the heavy failure on May 10, which will probably cost Interior Minister Marija Golubeva her job, the security services are mobilized to the maximum and the armed forces are ready to come to the rescue if necessary: "The Ministry of Defense is confident that the State Police will deal with this situation. However, if the need arises and the State Police asks for support, the National Guard will provide it."

Neatkarīgā asked for information on the preparedness of the State Police for the upcoming riots. Here is the response:

"Yes, the authorities are informed about the activities on May 13. The possible risks have been identified and the State Police, in cooperation with other services, are now preparing thoroughly, a plan is being drawn up and police resources are being prepared, including reinforcements from regional headquarters, and the State Police Special Tasks Battalion is fully prepared to work there. The police are on high alert and ready to respond. The State Police reminds that there will be zero tolerance for any kind of violations and persons who justify, glorify military aggression in Ukraine, the Soviet occupation and other similar violations.

Police action will be firm, concrete and immediate, and people will be held accountable. Such actions and manifestations have no place in our Latvia."

The President calls not to remain silent

And one more notable remark. Until now, all officials have called on people loyal to Latvia to stand by and watch the Kremlin supporters rampage in silence - not to provoke new escalations - but now the situation has changed. President Egils Levits has called on the Latvian public and everyone to make their position clear:

"(...) Latvians and all Latvian patriots, regardless of nationality, must say loudly, clearly and directly that they stand on the foundations of the Constitution, on the foundations of our shared Latvian and European values, that we stand together with Ukraine, not with Russia as an aggressor state. I therefore disagree with the recent advice that we should avoid expressing our views loudly. On the contrary, we should say it so that it is clear to everyone, including the people who go to the monument to the occupiers, that this is Latvia's shared opinion." The President's full views on the events of May 9 and 10 can be found HERE.