A diametrically opposite attitude towards the bright high-tech minds running away from Russia was demonstrated in April this year by the administration of US President Joe Biden and the Latvian Saeima.
24.05.2022. NNeatkarīgā 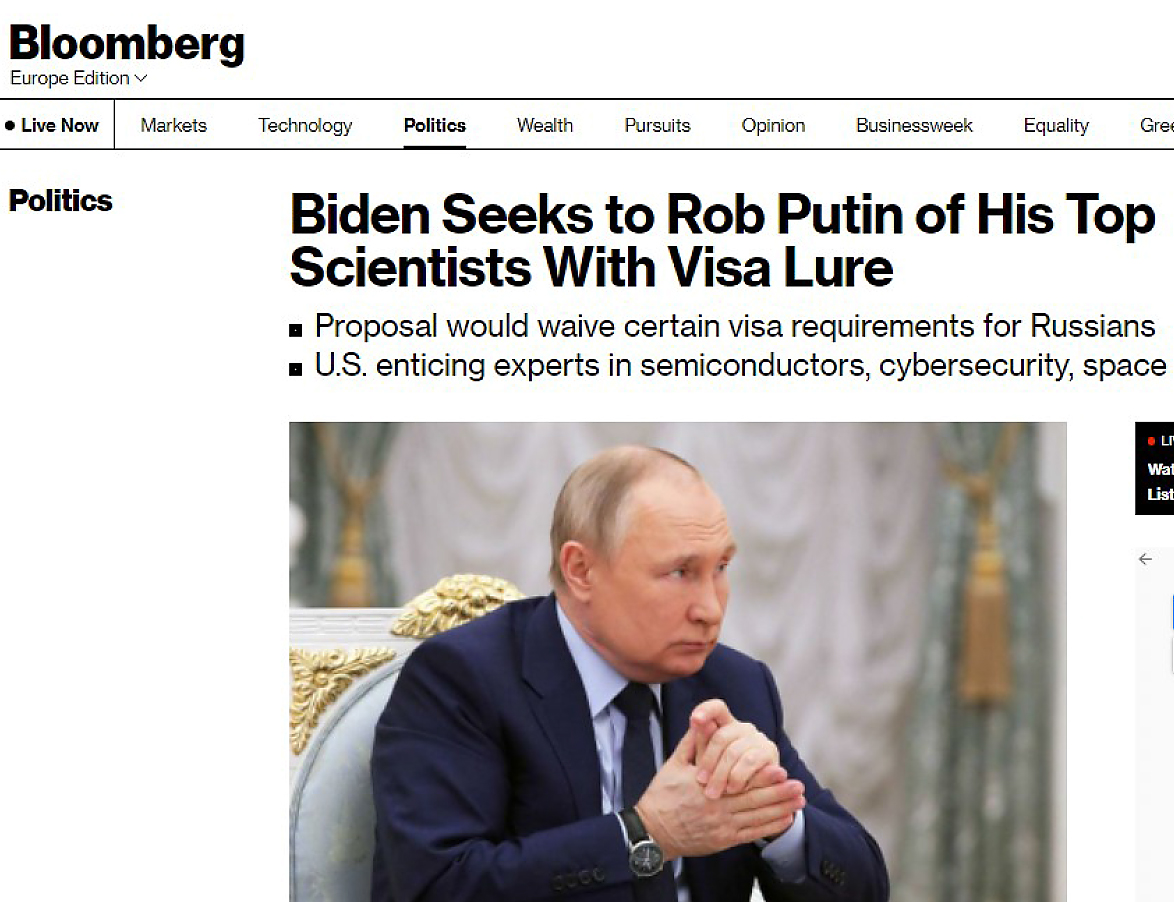 The US President did not hesitate for a moment to start work on easing entry and work visas to attract the bright minds that are running away from Russia to grow his country's economy and military might. The Latvian legislature and the President of Latvia did the complete opposite, banning them from even entering our country for more than a year ©Ekrānšāviņš no Bloomberg 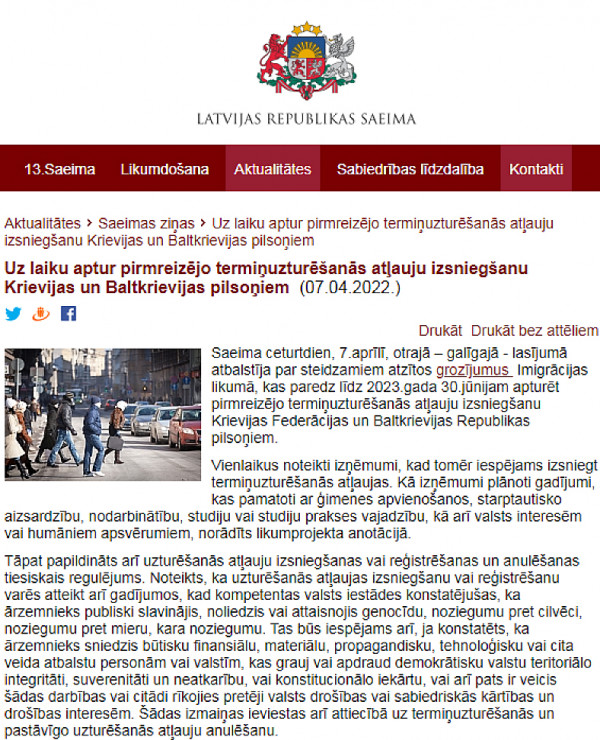 On April 30 this year, Bloomberg news agency learned that the US President's administration plans to ask the US Congress to lift restrictions preventing Russian and other bright minds from entering and working in the US, while the Latvian Saeima urgently amended the Immigration Law on April 7, preventing these specialists from even entering our country.

The different ability to see the benefits of Russia's high value-added creators demonstrates the different mindsets of the political leadership of the two countries and their desire to drive their economies towards growth and competitiveness in the global market.

The documents on the Saeima website mark the main promoter of the amendments to the Immigration Law as Mārtiņš Šteins, a member of the Development/For (Attīstībai/Par) faction - the same MP who is fond of promoting the homosexual lifestyle from the rostrum of the Saeima with his clothing.

Amendments to the Immigration Law were submitted to the Saeima Presidium on March 30 this year. On March 31, it passed through the responsible Defense, Internal Affairs and Corruption Prevention Committee, and on the same day, it was voted in first reading. A second vote followed a week later. On April 7, 80 voted in favor, 0 against and 0 abstentions. President Egils Levits hurried to announce the amendments already on April 8.

The amendments would suspend the issuance of first-time temporary residence permits to Russian and Belarusian citizens until June 30, 2023.

It should be recalled that March and April of this year was a time when many high-tech companies closed in Russia and many high-tech bright minds were looking for a new temporary place to live and work. Many of them were hoping to find a second home in neighboring Latvia.

Meanwhile, the US political leadership saw an opportunity to lure the bright minds that were fleeing Russia to their own country. As Bloomberg reported on April 30, the reason for the lifting of US restrictions on entry and work permits is the desire to attract semiconductor, computer security, space technology, rocket engine, nuclear engineering and other high-tech specialists to the US labor market. However, as pointed out in the media, the real purpose of the deregulation is to pump out the creators of the Russian innovation base, thereby weakening Russia and strengthening the US economy and security.

The dates of the two countries' divergent actions are significant. Latvia was in a great hurry to prevent bright minds from entering the country as early as April 8, while the US had by then already started work to facilitate their entry, as Bloomberg learned on April 30. The logical question is whether some of our MPs were not strongly urged by some respected foreign figures to rush through amendments to the law so that the specialists fleeing Russia would not stay in Latvia but would go to the US to increase its capital.

A leaf through the transcripts of the Saeima reveals that there was no real debate on the amendments to the Immigration Law. Jānis Dombrava, a member of the National Alliance (Nacionālā apvienība) faction, spoke several times during the last reading. He has said that no one from Russia or Belarus should be allowed into Latvia, as this is very dangerous for the security of our country. The only one who has dared to take a broader view of what is happening is Armands Krauze, a member of the ZZS faction. He has called on MPs to open their eyes and consider whether it would not be worthwhile for Latvia to attract the high-tech specialists fleeing Russia.

In the Saeima debate, he said: "Although Russia is currently ruled by a fascist regime and a large number of oligarchs and businessmen support this regime, there are also many people in Russia who are fighting against this regime, who are now leaving Russia, moving somewhere. These are humanitarian reasons for giving them asylum elsewhere. In many cases, it is in the national interest. I would like to draw attention here to the fact that the owners of IT companies, with all their employees, who have shown their opposition to the fascist regime in Russia and want to move to a neighboring country and continue to fight against this aggressor, shouldn't they be supported? ... I would like to mention, for example, the start-ups, which are also supported here. These young people who have started a start-up do not have any money, and they have not been able to buy a residence permit for hundreds of thousands until now. Therefore, these bright minds, and also people who are really ready to fight against the Putin regime and, at the same time, in the interests of our country, to stay here and pay taxes, should still be supported. ... Yesterday, it was reported that the Moscow office of Google has moved. To where? To Vilnius! Although, according to unofficial information, they had wanted to move to Riga. They moved to Vilnius because they could get all the paperwork and documents done very quickly - within a week. There are several other IT companies, software companies, which are now planning to move. The question is: where will they move to? Will they move to Estonia and Lithuania? This is not in the interests of the Latvian state, because then this business or this activity will be in neighboring countries, not in Latvia."