The environmental and security crisis will deepen. Global threats will increase

The world is not ready for a "new era of risk", according to the Stockholm International Peace Research Institute's (SIPRI) annual report "Environment of Peace" on the level of threats to global peace, published yesterday.
24.05.2022. BLBens Latkovskis 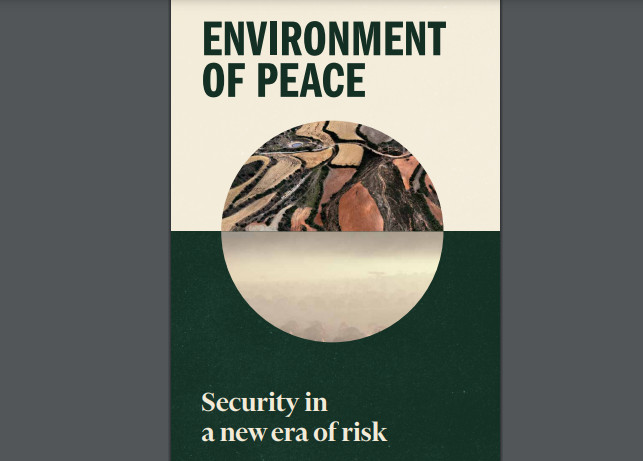 The report's executive summary begins dramatically: " Forests logged out of existence, mountain glaciers melting away, plastic pollution permeating land and ocean. More deaths in conflict, more money spent on weapons, more people going hungry. Human society may be richer than it was, but it is also markedly less secure. Governments have been looking the other way, and in some cases making matters worse by actively stoking insecurity, fear and environmental degradation. Without a fresh approach, the twin crises can only deepen."

The key words in this paragraph are: without a fresh approach. If a fresh approach is being proposed, one would expect the authors of the report to offer it. Are they offering it? Spoiler alert, no, they are not. And what do they mean by "fresh approach" anyway? Implicitly, the report answers these questions with this sentence: "Governments, notably those in the Global North, have collectively failed to find solutions to the major issues of climate change and loss of nature, and increasing insecurity is among the consequences."

The Global North is singled out in particular. The report capitalizes both these words and by them means developed countries, which have particularly sinned by failing to "find solutions". Is this a fresh approach? Literally in the next sentence: "Some African countries spend nearly 10% of their annual GDP on climate adaptation measures. Somalia’s government estimates that its climate adaptation needs each year are roughly equal to its entire GDP."

In other words, the Global North has failed to "find a solution" for the Somali government to adapt. Addressing the climate threat (let us not discuss the real or perceived danger of this threat) is expensive. Even very expensive. The question of who will pay for it is non-negotiable. It will be the Global North.

It is no secret what the Global South sees as the solution to this problem. Not only will we not pay, but we want to be compensated handsomely. Until recently, there was talk of a hundred billion dollars a year being paid by the North to the South, but last year, at the Glasgow conference devoted to this issue, the informal leader of the Global South, the authoritarian "democrat", the Prime Minister of India, Narendra Modi, without blinking an eye was already asking for a trillion. Every year.

But the real problem is not money. Even if the North were to collect the money and find that trillion, what guarantee is there that it would not turn into millions of new cars and other goods whose production would require even more carbon emissions than would be saved. No one is bothering to answer the question of how to reduce emissions if the world's six billion people are not prepared to voluntarily halt their consumption growth. But they should. That, then, would be the fresh approach that the authors of the report are talking about. But the report itself contains no trace of this "fresh approach".

There is hardly a hint of the second, or rather the first, major problem facing the world today. Although the Russian invasion of Ukraine is mentioned several times in the introductory part of the report, it is not mentioned in the body of the report. Given that three months have passed since the war began and the report leaves the issue out (the generic phrases in the introduction do not count), it can be concluded that the main task of this document is the same as that of most similar projects. That is, to act as a well-oiled money machine. A project is created just to tick a box. In return, money is received to be converted into goods and services, the creation of which generates the emissions that new projects are written about how to reduce. And so it goes round in circles.

Of course, it can be argued that such serious research does not happen in a day, or even in a month. It is long and painstaking work. The consequences of the Russian invasion will be analyzed in detail in next year's report. Unfortunately, there are some concerns about that too. On what basis? This year's report, like hundreds of others, is full of ideologically "correct" clichés with nothing but an imaginary foundation underneath. Why should future reports be any different? Why should the causes of this war be meaningfully investigated and evaluated if you can explain away the problems with the climate issue with the well-sounding cliché - "the Global North have failed to find solutions"? But the Global South can, and easily. Just give them a trillion.

I need to explain in a few words what I mean by imaginary foundations. It is a world vision based not on the reality of the world but on ideological fantasies. For example, it is based on the belief of Global North citizens that their diligence in sorting waste will "save the world". At the same time, this belief completely blocks out the question of what to do with the billions of people whose minds are preoccupied not with how to separate the paper from the cellophane in the packaging of a sandwich so that each piece of that packaging can be thrown into a separate container, but whether they can afford to buy these sandwiches for their whole family.

It is therefore not surprising that there is not a word in this report about the connection between Germany's nuclear policy and its growing energy dependence on Russia. Nor on how this dependence has grown the self-confidence of the Putin regime. There is little hope that next year's report will say anything about this. Even if there is, it is likely to be only as a rebuke for not building enough wind and solar farms.

The war in Ukraine, however cruel and terrible, is also of some benefit to human development. It clearly separates imaginary problems from real ones. It demonstrates starkly the futility of so-called project economics. It brings us from flying through the clouds of ideological theories back to the sinful earth. For the time being, however, this return is taking place with extreme reluctance and slowness, because who wants to solve real problems when you can continue writing various projects that give you both the moral satisfaction of helping to "save the world" and the opportunity to satisfy your ambition by buying the latest model (i.e. the most prestigious) Tesla. And to be compensated by the state for it.

This year's SIPRI report shows that a "fresh approach" to solving the problems is not so forthcoming. This, in turn, as its authors warn, only deepens the current crisis. So until the world arrives at a "fresh approach", hopes for peace will remain illusory.