Riots by Kremlin supporters are possible in Riga and Jelgava

Based on the recommendations of law enforcement authorities, the Riga City Council has banned the "russkiy mir" demonstration announced by the ultra-radical organization Latvian Russian Union (Latvijas Krievu savienība). The State Security Service has established that the activities of the pro-Kremlin organization pose a threat to the constitutional order of the Republic of Latvia. To the independence of Latvia.
25.05.2022. Imants Vīksne 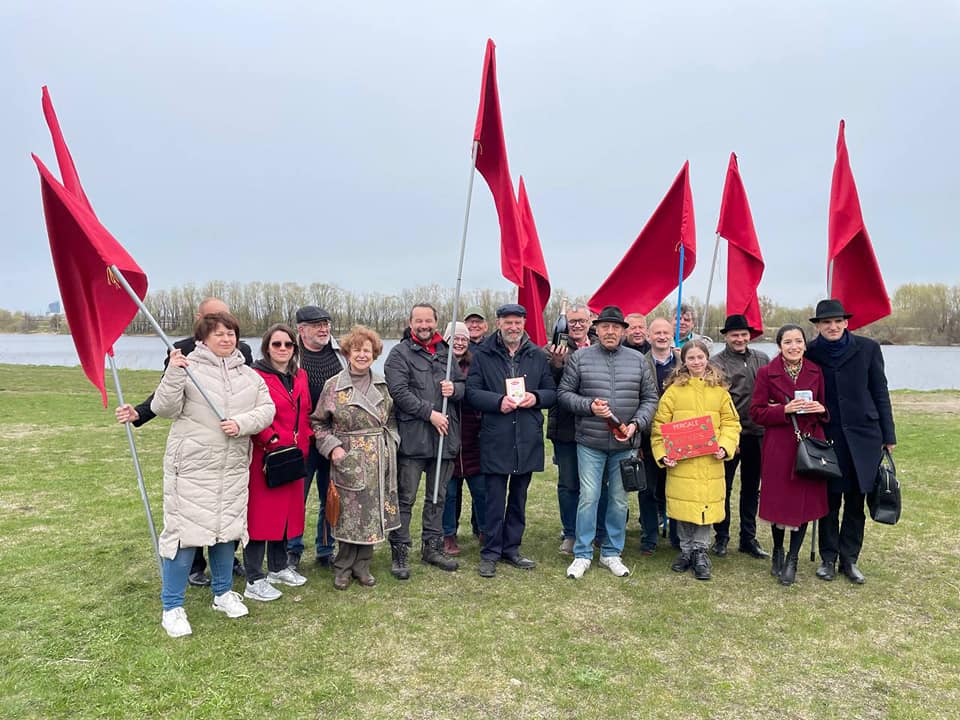 The red flag bearing working group of the Latvian Russian Union. With a sickle and hammer in their hearts ©LKS publicitātes foto

Despite the ban on the event, there is a high risk of provocation in Riga and, on this occasion, in Jelgava, during the city's festivities. Neatkarīgā has already reported that "Supporters of Russian aggression announce a new provocation". After openly mocking last weekend's patriots' march "For liberation from the Soviet legacy", the pro-Kremlin Latvian Russian Union announced a counter-march. A similar march, but in the opposite direction - from the object to be dismantled "Monument to Soviet Soldiers - Liberators of Soviet Latvia and Riga from German Fascist Invaders" to the Freedom Monument. It became clear already on Tuesday that the march announced for Saturday, May 28, would be banned, as the municipality had been advised to do so by the State Security Service.

It is forbidden to glorify genocide!

Here is the reasoning:

"The analysis of the information carried out by the State Security Service shows that the planned march would further increase the threat to the democratic state order, fundamental democratic principles, national security interests, as well as would contribute to the tendency to divide society. In addition, in the assessment of the Service, the proposed march, in view of its objectives, is incompatible with the growing tensions in society in connection with Russia's aggression, war crimes and crimes against humanity in Ukraine. The conduct of the proposed march would contribute to the commission of the offence under Article 74.1 of the Criminal Law, i.e. the public glorification and justification of genocide, crimes against humanity, crimes against peace and war crimes, and would endanger public security and public welfare."

The Latvian Russian Union has in the past attracted large numbers of people hostile to Latvia and Ukraine at its events, despite the ban on these events. That's what happened on May 9 and 10, then on May 13. And it may happen again on May 27 in Jelgava and on May 28 in Riga.

On their social networks, members of the pro-Kremlin organization share calls to come to rallies and parades to demonstrate the power of the Russian world - "russkiy mir". To prevent the dismantling of Soviet monuments and to prevent the transition to the state language in education.

In Jelgava, they will infiltrate the city festival

The situation is even more complicated for the Jelgava march than in Riga. Saturday's march is banned in the capital, so pro-Kremlin members and other Russian supporters are expected to be chased away - as happened at the unsanctioned rally on May 13 in Town Hall Square. And the main organizers of the provocation will be taken to the police or the State Security Service in a bus with barred windows. In Jelgava, the Latvian Russian Union plans to integrate its supporters into the city's festive procession. The call to gather both at the Jelgava city festival march on Friday and at the banned "All-Latvia march" in Riga has been issued on behalf of the party by one of the leaders of the pro-Kremlin organization, Andrejs Pagors. The speech "Pagors' forecast: conclusions of May" was published on the party's social network yesterday, when it was already clear that the demonstration in Riga had been banned. So the party is ready for the next violation. Following previous events, administrative and criminal proceedings have been initiated against a number of party supporters and associates. For glorifying Russian aggression and for using banned symbols. The Party is providing them with legal support and the like-minded are supporting them with material assistance. "The Latvian Russian Union will not leave its people in the lurch," promises Pagors and, as if unrelated, in a lengthy speech dedicated to the threat to Russian world interests, invites everyone to Jelgava because everyone is allowed to participate and everyone is welcome.

Dictated by the Kremlin

Riga Municipal Police is working in close contact with the State Police and other security bodies and will be ready to prevent anti-state provocations also on Saturday. The same should be done in Jelgava.

Otherwise, if not properly supervised, the city's festive celebrations could turn into a glorification of Russian aggression and genocide.

The pro-Kremlin Latvian Russian Union has already earned a lot of demerit points - party members and supporters justify Russian aggression, target Latvians and Ukrainians in words and deeds, agitate for defiance of state power and proudly display banned symbols. The reaction of the political environment and law enforcement authorities to this set of anti-state actions has so far been muted. There is a conceptual agreement in society that the Latvian Russian Union should be dissolved as soon as possible, but how this should be done in practice remains an open question. In the meantime, the pro-Kremlin organization is planning its next provocations. Because the Kremlin, the main organizer of "russkiy mir", dictates it.