Timothy Snyder and Alvis Hermanis are wrong. Russism is not fascism

Yale University professor Timothy Snyder's article "We should say it. Russia is fascist" in the influential The New York Times was a worldwide sensation.
26.05.2022. BLBens Latkovskis 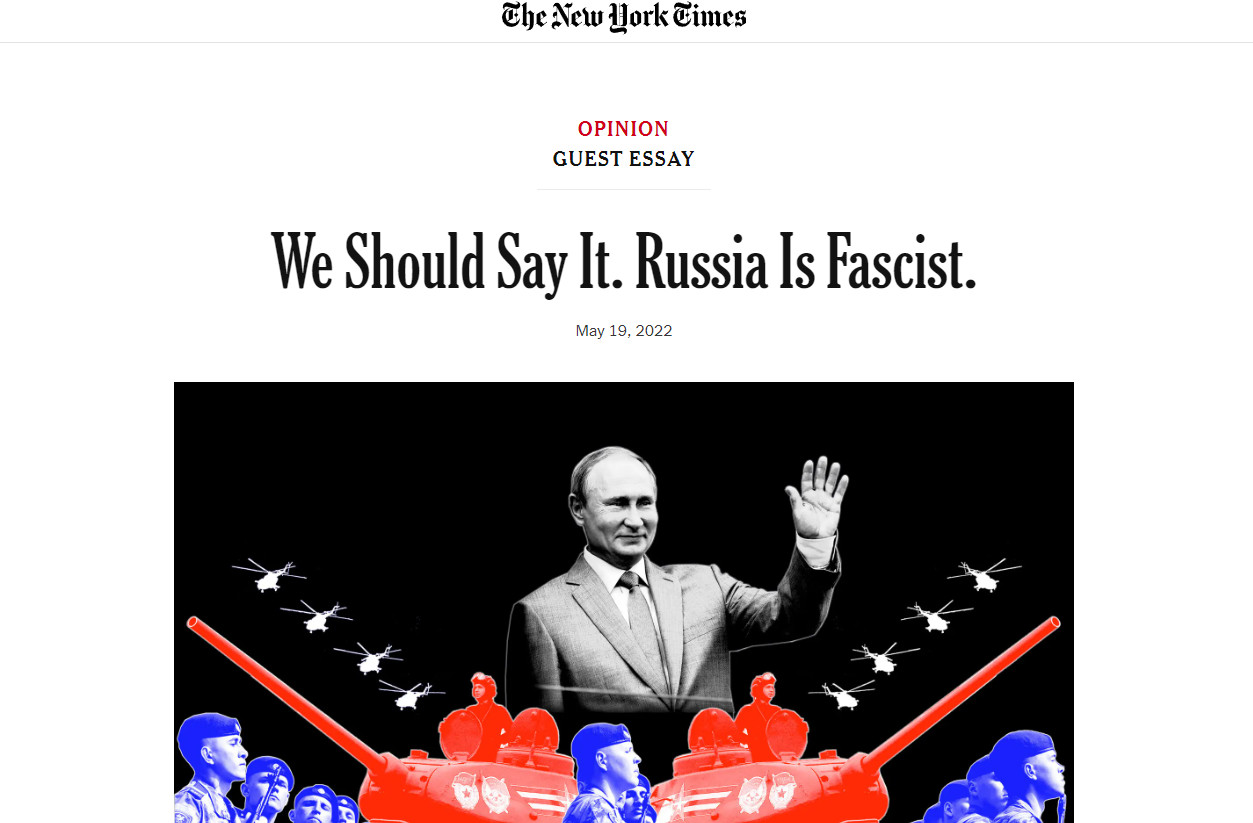 In Latvia, a Facebook post by the famous film director Alvis Hermanis gained popularity, which he concluded with the words, "...it would only be fair for us and the whole Western world to finally admit the fact: Russia is a fascist state."

One can understand the good intentions of both the Yale University professor and the renowned director, but inaccuracies in terminology often lead to wrong paths and to quite unexpected, undesirable results. In the present case, calling Putin's regime fascist may not do any harm, because such a comparison undoubtedly diminishes the attractiveness of the Russian regime in the eyes of the world, which is only to be welcomed, but it may have negative consequences for the post-war world order. In other words, in the long term.

What is the main difference between Putinism, or Russism, and fascism? It is the difference that puts the two ideologies on almost opposite sides of the political spectrum. First of all, so as not to confuse the issue, we must distinguish fascism from Nazism, which, on the one hand, is undoubtedly a form of fascism, but on the other, with the horrific tragedy of the Holocaust, leads down a path where rational, dispassionate analysis is no longer possible.

Fascism emerged at the beginning of the 20th century as a version of modernism. Fascism was one of the big three of modernism at that time - fascism, liberalism and communism. Fascism was a revolutionary ideology which aimed to create a new anthropological order, to create a new type of man. A superman whose actions serve a single purpose higher than himself. The fact that this "high" goal in practice was transformed into an extremely low, not to say vile, goal is another story, which we will talk about a little later.

Up to and even in the early stages of World War II, fascism and its variant Nazism were seen by many in Europe and the USA as a modern, progressive movement, as opposed to the politics embodied by the various doddering conservatives in tuxes and top hats. For example, archaic backwards people like Winston Churchill. It only seems strange from a modern perspective that Churchill lost the election in 1945 (!). The year of victory.

Hitler in Germany, Mussolini in Italy and their followers in other countries came to power on a wave of revolutionary change, revolutionary enthusiasm, with the aim of sweeping away into the dustbin of history the old, musty centuries of prejudices of the Western world. It was a movement that inspired progressive youth. Fascism requires an extremely broad involvement of the masses of society. Its politicization and mobilization. In the fascist and Hitlerite marches, people were not forcefully brought, thrown in buses and promised 300 rubles for standing for two hours with a handed-out poster, as in Putin's Russia.

Putinism, or Russism, is the opposite of fascism in terms of the development of the world. It is counter-revolutionary, strictly opposed to any social reforms and social mobilization. It is not based on the youth, but on those who are stuck in the past. Putinism's social course is aimed at the depoliticization of society. You can do what you want, just stay out of politics. We give you bread and entertainment, you don't interfere with our rule, that is the social contract of Putinism.

In Putinism, a person should be as little interested in politics as possible and concentrate on his personal affairs. This is in complete contradiction to the fascist ideology, which is focused on mass political activism and the primacy of the common idea over one's personal [petty] interests. In Putinism, on the other hand, social activism and the politicization of the masses are seen as a mortal threat. It is the fear of its own people that prevents the Russian regime from announcing a military mobilization to break the course of the Ukrainian war in its favor.

One can argue that I am splitting hairs, because it is clear that both Snyder and Hermanis, when they called Russia a fascist state, were thinking more in terms of journalistic emotion than in academic terms, that Putin, like Hitler, is absolutely evil. One can only share this view, but, as I said at the beginning, the genesis of fascism, like communism, from "high" aims to vile crimes is an extremely good example of what revolutionary fanaticism leads to.

The Communist atrocities in Russia after 1917, the Chinese Red Guards, Pol Pot and other sickle-and-hammer Che Guevaras with their hands up to their elbows in blood, are supposedly talked about at length, but the ghost of Communism still haunts the world, threatening with millions of new corpses. The Antifa movement popular in the West today, if we look closely, is the same fascism, but with slightly different, more left-wing accents.

Yes, the main threat in the world today is the extremely archaic Russian imperialism, stuck in the deep past, which, precisely because of its socio-anthropological backwardness, is bound to lose in the end. But we should already be thinking about what comes after. After the war.

Let us add in parentheses that if Putinism does not lose (there is also this possibility if the West listens to the various Kissingerites), the world will slowly slip into the Dark Ages. Roughly like Europe after the fall of Rome in the 5th century. For those who think that Rome collapsed in one day or one year and that everyone there immediately noticed the change, let me remind you that the Roman Senate only ceased to function in 630. Even though the (Western) Roman Empire is said to have ceased to exist in 476. That is, 154 years later.

But let us return to the present day. After the collapse of Putin's regime, the world order will inevitably change. It is too early to say what that order will be, so let us not try divining that in coffee grounds, but we should already be wary of attempts to shift accents and use the word "fascism" to describe something archaic and conservative. The fact that Hitler has forever compromised the words fascism/Nazism does not mean that these revolutionary ideas have disappeared. They have just acquired other names. For example, anti-fascism.

Let us remember the big three of modernism. Fascism has been discredited. But communism, despite the even greater number of people killed, is not only going strong, but under various Antifa banners still counts as progressive and cool. That is to say, a valid option. But what about the third brother of the big three, liberalism? It is slowly but inevitably merging with communism, although if we look more closely we find that the three brothers are gradually becoming indistinguishable.

If Putinism is called fascism, as Snyder and Hermanis suggest, then its twin brother Antifa can try to claim victory in the post-war world and continue to poison society. Just like communism after World War II. Therefore, for the sake of the future, all these 20th century modernisms and their 21st century reincarnations must not be given the laurels of victors. All these -isms must never be allowed to determine the vector of development in the post-war world.