Germany is also trying to attract bright minds from Russia 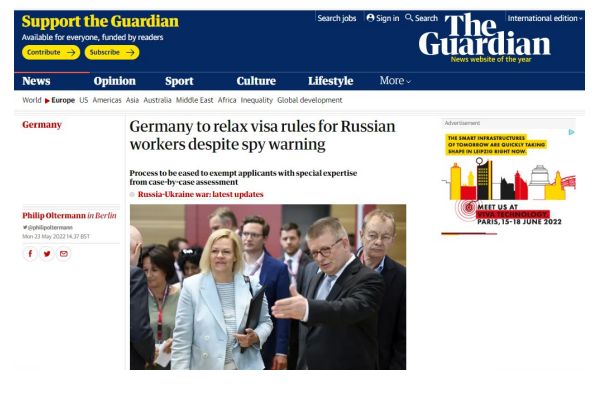 Germany has become the second country after the US to fight to attract high-tech specialists from Russia and Belarus by simplifying entry visa and work permit procedures, in contrast to the Latvian Saeima's decision not to allow them into the country ©ekrānšāviņš no The Guardian

This makes Germany the second country, after the US, which is fighting to attract high-tech specialists from Russia and Belarus by simplifying entry visa and work permit procedures, in contrast to the Latvian Saeima's decision not to allow them into the country.

The US administration of President Joe Biden was the first to announce its readiness to facilitate the admission of bright minds from Russia.

Katharina Vorlaender, a Labor Migration Lawyer at Fragomen Global LLP in Frankfurt, told DW: "Starting from the first weeks of the war, we have helped more than 400 Russian citizens get work visas to move to Germany."

The Guardian also notes that Germany was in no hurry to ease the visa regime for Russians when the war broke out. This is evident from the relatively low number of visas issued between February 24 and the end of April at the German embassy in Moscow - around 350 - and at the German consulate-general in St Petersburg - 190. "The country’s domestic intelligence agency warned of a heightened risk that Russian nationals working for German firms could be recruited for industrial espionage," the British newspaper said.

According to the Guardian, the German Federal Office for the Protection of the Constitution has also issued a special warning that Russians who have arrived or are planning to arrive in Germany are at increased risk of blackmail by Russian services to obtain information needed to develop the Russian economy.

According to the Guardian, 235,000 Russian citizens currently live and work in Germany, more than in any other European Union country. And according to the Russian Electronic Communications Association, some 70,000 IT specialists left Russia in March this year alone, and this number is estimated to have doubled in April.

As is well known, the Latvian Saeima acted contrary to the example of Germany and the USA and instead of facilitating the procedure for obtaining work permits, it urgently amended the Immigration Law to ban Russian and Belarusian citizens from entering Latvia until June 30, 2023.

On April 30 this year, the Bloomberg news agency learned that the US presidential administration plans to ask the US Congress to lift restrictions preventing Russian and other bright minds from entering and working in the US, while the Latvian Saeima urgently amended the Immigration Law on April 7 to prevent these professionals from even entering our country.