Estonia will also allow Russian and Belarusian refugees to work there 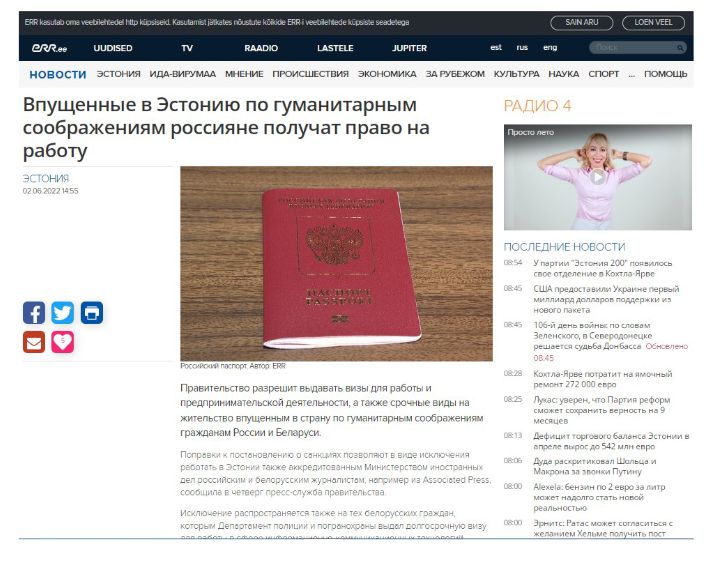 The Estonian government decided to issue visas with work and business permits, as well as urgent residence permits for Russian and Belarusian nationals ©Ekrānšāviņš no Igaunijas sabiedriskās televīzijas ziņu portāla

Estonia is thus the third country to publicly declare a favorable regime for Russian and Belarusian citizens fleeing those dictatorships to enter and do business. About a month ago, the US presidential administration and the German government announced their commitment to facilitate the entry of Russian and Belarusian citizens who are high-tech professionals. In contrast, the Latvian Saeima urgently amended the Immigration Law, which prevents Russian citizens from even entering our country.

Belarusian citizens who have been issued long-term visas by the Estonian Police and Border Control Department with work permits in the IT business sector will also be granted favorable treatment.

In general, the favorable treatment for work and business is limited to Russian and Belarusian nationals who have come to Estonia to escape dictatorial regimes and whose stay in Russia or Belarus would be life-threatening.

Neatkarīgā already reported that Germany was second only to the US in fighting to attract high-tech specialists from Russia and Belarus by simplifying the procedures for obtaining entry visas and work permits, in contrast to the Latvian Saeima's decision not to allow them into the country.

The US administration of President Joe Biden was the first to announce its readiness to facilitate the admission of bright minds from Russia.