Kazakhstan's citizens have voted overwhelmingly in favor in a referendum on the democratization and modernization of state and local government proposed by President Kassym-Jomart Tokayev.
15.06.2022. Ritums Rozenbergs 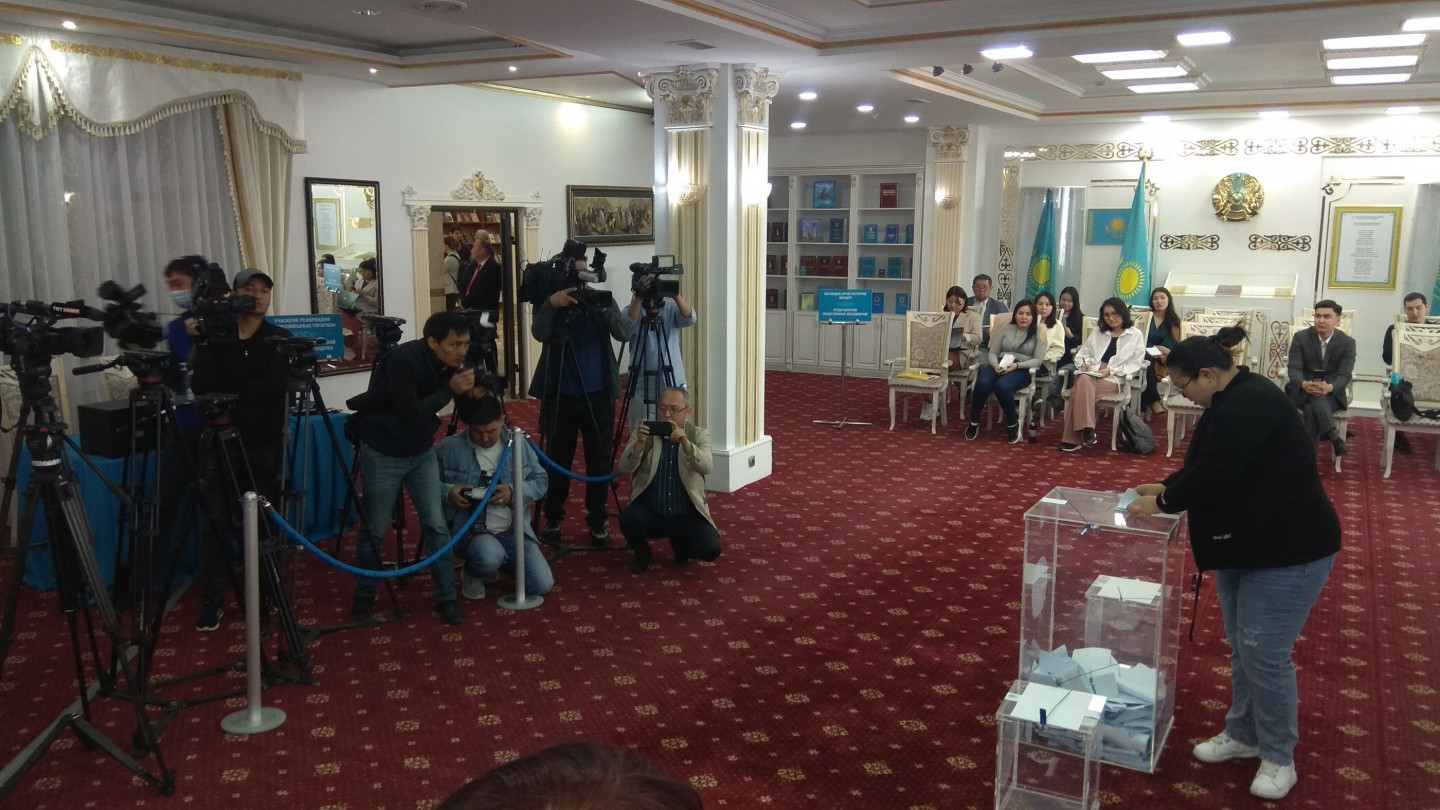 For the people at the polling stations, the referendum is associated with the hope for a "New Kazakhstan", which in their understanding, as commented by officials, political analysts and local press, means the creation of a much more democratic political system - the transformation of a super-presidential power into a presidential republic with a strong parliament ©no personīgā arhīva

The referendum took place on June 5 this year. The following morning, Nurlan Äbdirov, Chairman of the Central Election Commission, announced that 77.18% of Kazakh voters had said "yes" to major changes to the Kazakh Constitution. Only 18.66% voted against, 2.58% of ballot papers were declared invalid and 1.58% of ballot papers were not included in the count for various technical reasons. 68.06% or 7.99 million eligible Kazakhs voted.

Once the results of the vote have been formally approved by Parliament, work will begin on amending a number of laws and legislative acts to implement the changes voted for by the people of Kazakhstan.

For the people at the polling stations, the vote is associated with the hope of a "New Kazakhstan", which in their understanding, as commented by officials, political analysts and local press, means the creation of a much more democratic political system - the transformation of a super-presidential power into a presidential republic with a strong parliament, democratization of the electoral system, a significant increase in the role of the lower house of parliament and regional governments, greater involvement of the population in public administration, demonopolization and deoligarchization of the Kazakh economy.

For example, the constitutional amendments provide that the President of the Republic will be obliged to terminate his party membership for the duration of his term of office. The legislation will require the chairpersons and members of the Central Election Commission, the Accounting Commission and the Constitutional Council to abstain from party membership upon taking office. Mayors - akims - and their deputies will also be barred from holding office and party work. The President's close relatives will be prohibited by law from holding political office and leadership positions in the private and parastatal sectors.

Currently, the President has the power to remove district and even village akims. After the constitutional amendment, the Mazhilis, or lower house of parliament, will be given the power to pass laws. The Senate's powers are to be extended to include the right to approve candidates for the positions of President of the Constitutional Council and President of the Supreme Judicial Council. Non-partisans will also be able to stand for election to parliament.

The Kazakh government prepared very carefully for the referendum and for the announcement of the event to the world. More than 200 international observers were invited to observe the referendum, including two representatives from Latvia, as well as journalists from China, Russia, the USA, India, Israel, Egypt, Italy, Belgium, Bulgaria, Germany, Czech Republic, Slovakia, Slovenia, South Korea, Mongolia, Armenia, Azerbaijan, Georgia, Kyrgyzstan, Poland, Pakistan, Lithuania, Latvia and Estonia. Latvia was represented by Neatkarīgā. Visits to several polling stations, meetings and press conferences with Kazakh politicians, officials and international observers were organized for foreign journalists. We were also allowed to talk to voters themselves.

The younger generation of voters believes that the country needs to move faster along the path of democratization, marking "yes" on the ballot paper. It should be noted that young people in Kazakhstan are also fluent in English. Not all of the older generation approached by Neatkarīgā were willing to comment, but those who did expressed clear support for the country's course towards modernization of the political system. A lady in her 80s came to the special attention of journalists after Neatkarīgā helped her up the stairs at the entrance to the National Academic Library, where the polling station was located. She expressed pride in her country and its achievements so far, while noting that everything is based on hard work and caring for people. She said that she would vote for reforms so that the motherland would continue to prosper and thrive.

Looking out over the Nur-Sultan skyline, needless to say, one could hardly doubt her words. In the newly built city, multi-story buildings of various styles and architectures, made of glass and metal, glitter in the sun all around. Cars speed along the wide, pothole-free asphalted streets, while smiling people move along the pavements.

At the polling stations I managed to visit, voting went smoothly, without undue crowds. At each polling station, more than ten different observers, mostly from NGOs, were watching the process. At 2 pm, the Central Electoral Commission announced that the referendum had been held, as half of those eligible to vote had made their choice.

One explanation for the high turnout was given by Tatiana Ibrayeva, head of the polling station commission in Akmola village, 20 kilometers away from Nur-Sultan. She explained she knew every voter in the village like a mother knows her own children, so it was not difficult to predict the turnout. Akmola is officially a village, but for the national scale, it is a town of about 12,000 inhabitants. Asked what her predictions were for the turnout, Ibrayeva answered laconically: if there were local elections, 98.8% would vote, if there were presidential elections - around 80%, and in the referendum, there would be no less than 70% of those eligible to vote.

At press conferences, international observers praised the conduct of the referendum and the polling station staff for their high level of professionalism, quality of work and strict compliance with the law.

Zayniddin Nizamkhodjayev, Chairman of the Central Election Commission of Uzbekistan, noted the opportunity to enrich his experience by participating in the observation of the referendum in a neighboring country.

Vladimir Poletayev, representative of the Inter-Parliamentary Assembly of the Commonwealth of Independent States and First Deputy Speaker of the Upper House of the Russian Federation, praised Kazakhstan's ability to respond quickly to the tragic events of January this year (referring to the foreign-provoked riots in early January, in which several dozen people were killed) and to draft amendments to the Constitution within a short timeframe, providing for substantial democratization of the political system.

Elvira Azimova, Commissioner for Human Rights of the Republic of Kazakhstan, revealed that when preparing the constitutional amendments, the working group had wondered whether it should go further in democratizing the country by incorporating more substantial changes into the constitution. However, after assessing the real political and socio-economic situation, they settled on the threshold of the changes proposed in the referendum. Azimova stressed that the next amendments to the Basic Law are not far off, as democracy develops: "It should be stressed that people were longing for a referendum. The results of this referendum will be important for every citizen of the country, but also for public organizations, whose views will be listened to even more."

Zhang Ming, Secretary General of the Shanghai Cooperation Organization, noted the high level of people’s participation in the referendum and stressed that no violations of the law were recorded during the referendum. Ming praised the meticulousness and professionalism of the polling officials. Wishing success to the New Kazakhstan, he recalled that "the aim of the referendum is to build a New Kazakhstan, one in which people will live in a democratic, happy and just society. If the result of the referendum is positive, it will mean progress towards this goal. I am in Kazakhstan and Nur-Sultan for the first time and I see that a completely new city has been built here. You have managed to build a new, lively city in twenty years. I see that the population of this city is predominantly young. Talking to them, I was impressed by their determination and optimism to improve their lives, their city and their country. This city also reminds me very much of the newly built city of Shenzhen in China (a city in southern China, in Guangdong province, in the Pearl River Delta, bordering Hong Kong to the south, Dongguan to the northwest, and Huizhou to the northeast), which plays an important role in the development of science and innovation in China. We see in Nur-Sultan’s prosperity the overall development of Kazakhstan".

Upcoming reforms also in the economy

As Erkin Tukumov, Director of Kazakhstan Institute for Strategic Studies, explained, the expected positive results of the referendum will significantly reduce tensions in society and allow for more effective, faster solutions to problems in the country's regions, as the amended laws will empower local governments to decide on a much wider range of issues, many of which will no longer need to be coordinated with the center. The second aspect is that power will be closer to the voter, who will be able to directly hold the popularly elected representative to account. In a conversation with Neatkarīgā, Tukumov predicted that the changes to the constitution will be quickly implemented in the law - by the end of this year at the most. Asked what the next step towards democratization could be - another referendum, or whether amendments to the laws would be enough, Tukumov said: "We are not Switzerland - the land of referendums. The last referendum here was 27 years ago. I don't think the next referendum will be 27 years from now, but it is not a question of one or two years. It is unlikely that another referendum will be necessary, because this referendum actually changes one third of the constitution. Socio-economic reforms now need to be worked on diligently. With this referendum, we are laying the foundations for our further progress towards socio-economic development. We have enough internal problems. One of them is socio-economic inequality, inequality between regions, the quality of education and so on. These are the same issues that preoccupy heads of state in other countries of the world. You understand, however, that political reforms alone will not produce results unless there are also socio-economic reforms. If a country reaches democracy and democracy is not followed by economic progress, the trouble starts, the populists appear, promising all sorts of good things to the people."

Asked what doors in foreign policy will open wider for Kazakhstan thanks to this referendum, Tukumov said: "In foreign policy, we have stable relations both with the West, as well as Russia and China. So to talk about these relations and how they will change in the context of the referendum is not the question. But our commitment to democracy is seen positively in many other countries too. After all, it is much more pleasant and beneficial to deal with a predictable country. If you are asking about doors, I would like to mention here not so much the European Union and the West, Russia, China, with which we have good relations, but our neighbors. We should cooperate more with them and solve problems together, just as Poland, the Czech Republic and Hungary do. We should take on their experience of cooperation and work more intensively together on issues such as water supply or the opening of borders. Central Asia should have a free border area similar to the Schengen countries. The free movement of people between countries is a value in itself."