While the Saeima, in response to public demand, is passing a law to demolish all Soviet monuments in Latvia and ban political parties from glorifying crimes against humanity, the only party that supports the aggression of the Russian Federation is busy collecting signatures against these laws.
17.06.2022. Imants Vīksne 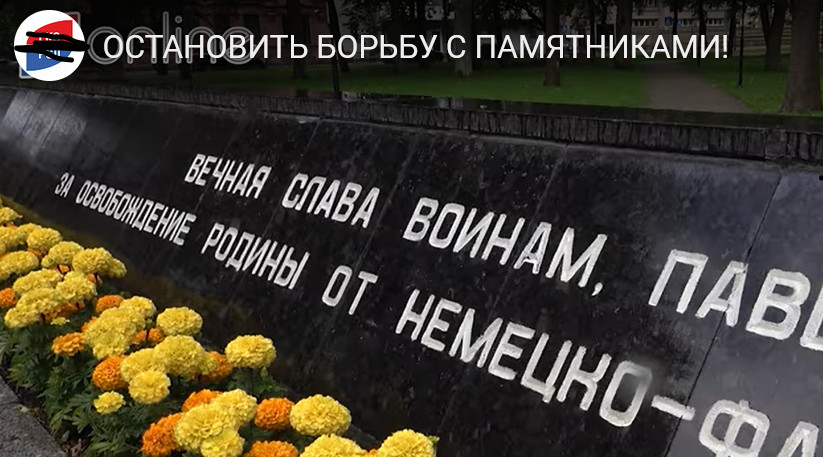 The signatures of people hostile to Ukraine and Latvia are being collected under two petitions with similar content - to preserve the monuments and to stop the wave of Russophobia in the country. The face-to-face signature collection is organized in the Liepāja, Daugavpils, Riga and Jelgava offices of the only openly pro-Kremlin party in Latvia. In the Russian-speaking world, there is a broad campaign in which people who are well-known in their communities campaign against the demolition of Soviet monuments, saying that it is barbaric, a desecration of history, a glorification of Nazism, etc. The series of videos filmed in Daugavpils even threatens: "We will defend any monument on the territory of any country." The petition itself tells the lie that Russians are persecuted in Latvia, that racism reigns here, and that therefore the European Parliament's Petitions Committee “must take measures to stop the growth of xenophobia in Latvia and hate speech against Russian-speaking people”.

It is worth noting that this provocative essay is not even available in Latvian on the party's website. This is understandable, since the party's program advocates de facto bilingualism in the country. It also advocates increasing the influence of the Russian Federation. The party supports the invasion of Ukraine and does not recognize the fact of the occupation of Latvia. At the same time, this pro-Kremlin party is richly financed by the budget of the Latvian State and the European Union. Neatkarīgā already reported on this in its publication "Cold facts about an anti-state party." Collecting signatures against the demolition of monuments glorifying the occupation regime is one of the latest activities of the party, which serves to identify and expand its electorate. There is a strong possibility that the party hostile to the Latvian state will not even be allowed to take part in elections.

First, the State Security Service has issued a warning to the party "not to commit any violation of the law that is against or may harm the security of the state". However, the party has not changed its behavior and its activities are still aimed at justifying the Russian Federation's foreign policy and violations of international law, as well as at spreading propaganda messages. Secondly, the Saeima has urgently drafted amendments to the Law on Political Parties which prohibit parties from publicly praising, denying or justifying genocide, crimes against humanity, crimes against peace, war crimes, as well as carrying out or supporting actions aimed at undermining the territorial integrity, sovereignty, independence or constitutional order of democratic states. Basically, the bill is dedicated to this particular pro-Kremlin party, which is mobilizing supporters of Russian aggression in Latvia. This includes a petition to the European institutions about racism and the persecution of Russians in Latvia.

Petition of the deceased

A second petition with similar content "Against the demolition of war monuments in Latvia" is being promoted on the Internet and will be submitted to the Saeima. The author of the petition is listed as one Bert Collins. It is very likely that the name is fictitious and that it is the same pro-Kremlin party, its employee or follower who is defending the legacy of the criminal Soviet regime in the name of the citizens of Latvia. Bert Collins is an Australian veteran of the Second World War who died this year at the age of 105, and there is no way he could have advocated the preservation of monuments to Soviet soldiers because, you see, they “liberated our lands from fascist invaders”. And no - they did not liberate our lands, they occupied them. But the pro-Kremlin party does not recognize this fact either. Of course, the signatures collected will have no practical consequences, except that the autographs of persons unfriendly to Latvia have been collected in yet another catalogue. By May 16, 11,995 apologists for the aggression of the Soviet regime and its heir, the Russian Federation, had signed the online petition. It has not yet been announced how many were collected in person at the offices of the pro-Kremlin party.