The visit of the leaders of Old Europe to Kyiv can be seen as hopeful, although concerns about traditional cowardice persist 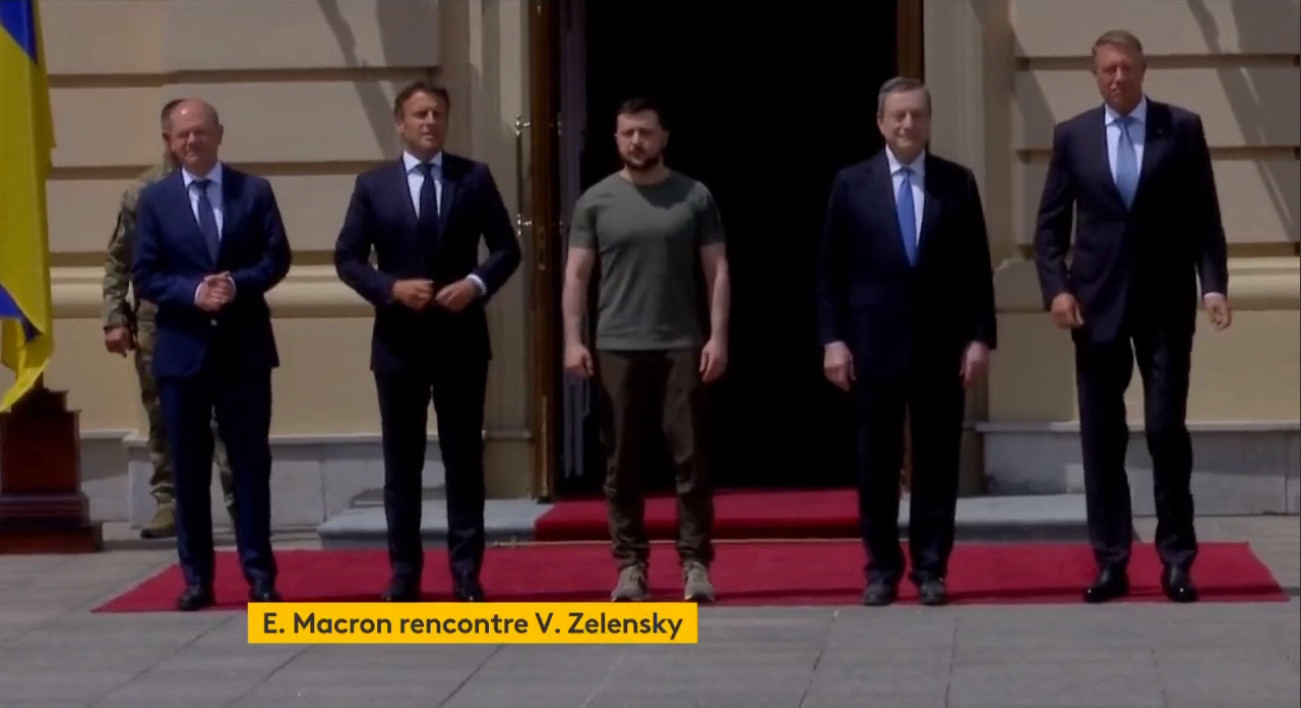 Since the start of the war, Zelensky has received foreign guests in informal military dress, and the guests have usually dressed informally. On this occasion, all four heads of state were dressed strictly according to protocol - in suits and ties ©Ekrānšāviņš

Those who have been following the hostilities in Ukraine closely will have noticed that world attitudes towards what is happening there are changing more rapidly than sometimes in hockey. It's almost like a roller-coaster - up and down! Depressing pessimism is replaced by inspiring optimism and vice versa. And so it goes, so that from Ukraine's point of view, the rather hopeful visit of the leaders of the European powers is too early to be considered a clear success. There have already been many promising applications which have, in the end, resulted in quite modest results.

When, on April 26, the defense ministers of more than 40 countries gathered at the US air base at Ramstein (Germany) and formed the Ukraine Defense Consultative Group; when the US gave Ukraine a 40 billion dollar aid package and President Joe Biden signed the promising Lend-Lease Act, it seemed that Putin was finished, Ukraine would soon receive heavy weaponry, launch a counter-attack and expel the occupiers from its land. At the May 9 Victory Parade in Moscow, Putin looked a frazzled mess, his legs covered with an old man's blanket. Rumors of his health problems were rife, and an unfavorable outcome to the war for him seemed only a matter of time.

But not a few weeks passed and the general mood changed radically. The same inexplicable delays that had already been seen in the past appeared to be continuing with the delivery of heavy weapons. Of the $40 billion allocated by the US, no more than $10 billion was earmarked specifically for arms for Ukraine, of which $5.3 billion has already been spent, but the Lend-Lease Act turned out to be a strange, not to say empty, document, with absolutely nothing concrete in it. Unlike the “real” 1941 Lend-Lease Act, which clearly listed what could be delivered and up to what amount of money the President could provide those deliveries.

At the same time, the so-called Italian peace plan appeared, which provided for the immediate opening of peace negotiations without any preconditions. It called for a ceasefire, with the parties staying where they were. So first the talks, and then we will see what comes of it. The subtext (although it did not appear anywhere in the “peace plan”) was that Ukraine would have to accept territorial losses. How big these losses would be would then be the main subject of negotiations.

There was also talk that Putin should be allowed to "save face" and not humiliate Russia in order not to repeat the mistake of Versailles, which brought Hitler to power in Germany. In the article "Emmanuel Macron's mistake, which is bigger than a crime" I have already argued why this is fundamentally wrong. Why talk about future threats if they have already come true? Russia is not under the threat of some Hitler coming to power in the future, because his counterpart is already in power there. For 22 years. Macron himself said in Strasbourg, speaking to EU accredited journalists, that Ukraine's accession to the EU could be decades away.

In this climate, which is not very favorable to Ukraine, and which has been compounded by the rather harsh statements made by the Ukrainian Ambassador to Germany Andriy Melnyk, the Kyiv spokesmen Oleksiy Arestovych and Mikhail Podolyak, and by senior Ukrainian officials themselves against certain European leaders and their policies, the 23rd Council of Europe summit is approaching. The European Council is scheduled to meet on June 23-24 to decide on granting Ukraine candidate status, the G-7 leaders' summit on June 26-28 and the NATO Madrid Summit on June 29-30 to review NATO's Eastern Strategy.

As the political vector of the last weeks was not favorable for Ukraine, before the visit of the old European leaders to Kyiv there were rather controversial predictions about the gift (message) they would bring to Zelensky. The fear was that these more skeptical European politicians would more or less openly pressure Ukraine to make concessions, essentially echoing Putin's political will.

The fact that this was not a meeting of old and close friends was already evident from the dress of the guests. Given the difficult situation in which the Ukrainian President has to work, he receives all guests in an army-style T-shirt and military trousers. Accordingly, his guests, regardless of their rank, usually meet with Zelensky in informal clothes. On this occasion, all four heads of state were dressed strictly according to protocol - in suits and ties. On the Ukrainian side, all the greeters were either in military uniform or in casual clothes.

In the group picture, too, all were at a distance from each other and there was no symbolic handshake, as there was when Zelensky was photographed with the presidents of Poland and the Baltic States. When receiving the distinguished guests, Zelensky shook hands with them in a rather reserved manner. Only with Macron did he, on his own initiative, embrace, but it could not be said that the embrace looked particularly cordial.

Although the visit ended on a positive note for Ukraine - with a promise that Ukraine will be granted EU candidate status at the forthcoming EU summit - this does not mean that Ukraine's road to EU membership will be a fast and rosy one. It has been proved often enough that European leaders' fine words are followed by poor deeds and they always find excuses why they cannot deliver.

Among the immediate and concrete gains for Ukraine is Macron's promise to supply Ukraine with six more 155 mm Caesar self-propelled howitzers, in addition to the 12 artillery pieces that have already been delivered. Although Chancellor Scholz's visit has already been described as historic by the German ruling coalition, Scholz himself was evasive when asked directly by journalists about the heavy weapons deliveries.

Die Welt, on the other hand, already reported on Friday that "behind closed doors" the leaders of the European powers had nevertheless urged Zelensky to start talks with Putin sooner. The fear remains that behind the friendly smiles and hopeful promises remain the same slick, vague and, to call a spade a spade, cowardly policies for which Macron and Scholz have been rightly criticized by many in the months since the war began.

On the whole, at least the visit of the European leaders to Kyiv was not disastrous, which is saying a lot, given the trends in the Old Europe.