There is another side to the claim that expensive fuel is the price we pay for Ukraine's freedom. We are paying that price to Russia. Although Europe says it is restricting the flow of oil from Russia, statistics show that Russia's income from the oil trade is only increasing with every day of the war.
20.06.2022. Imants Vīksne 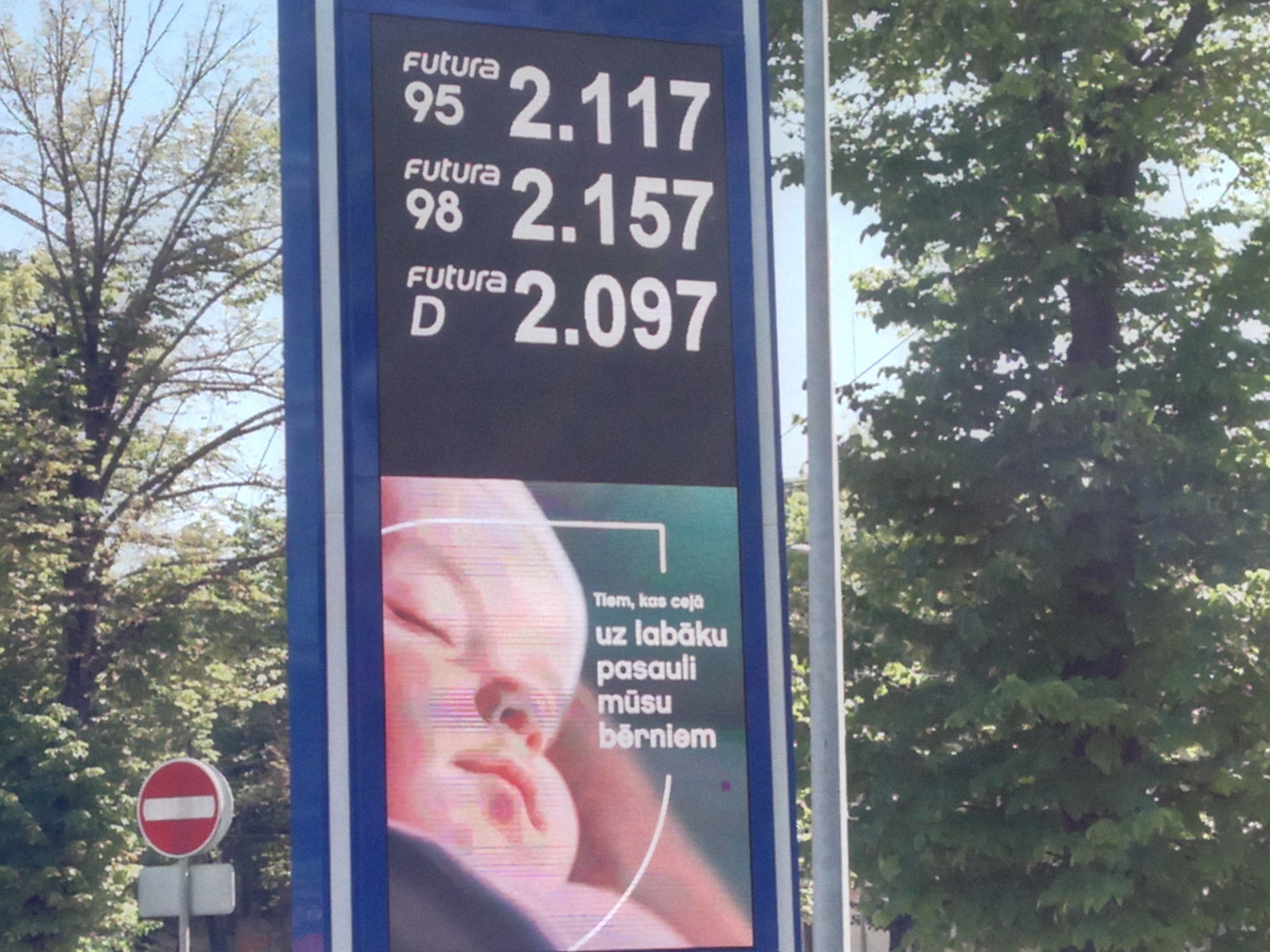 According to estimates by military experts, the Russian Federation needs an average of €840 million a day to maintain the intensity of the war. In the Russians' favorite currency, US dollars, that is 900 million. This includes all the direct costs of warfare: ammunition - bullets, grenades, rockets. The cost of repairing damaged equipment. Destroyed tanks, armored vehicles, etc. A seemingly enormous sum. But, as the Helsinki-based environmental and energy research organization Centre for Research on Energy and Clean Air (CREA) has studied, these huge expenditures are fully offset for the Russian Federation by fossil energy exports. Oil, gas and coal. And just as the European powers are constantly talking about grandiose aid for Ukraine, but in reality they are not really helping at all, the same is true of fossil energy. The reduction in imports to date has been rather symbolic and, in accordance with the laws of the market, has benefited Russia. It exports less, saving its fossil resources, but earns more.

The CREA study "Financing Putin's war: Fossil fuel imports from Russia in the first 100 days of the invasion" shows the following picture, comparing one day's income in May 2021 and 2022. Last year, Russia earned an average of $661 million per day by selling fossil resources to other countries. This year, exports and revenues have fallen by 99 million due to sanctions, and by a further 105 million due to lower prices. Russia is currently dumping in the energy market. And with all this reduction, Russia's income has risen by $467 million a day because of global price rises. As a result, Russia's daily income in May from fossil trading was $922 million, which is $22 million more than the cost of war. So enough to pay its soldiers and their widows. 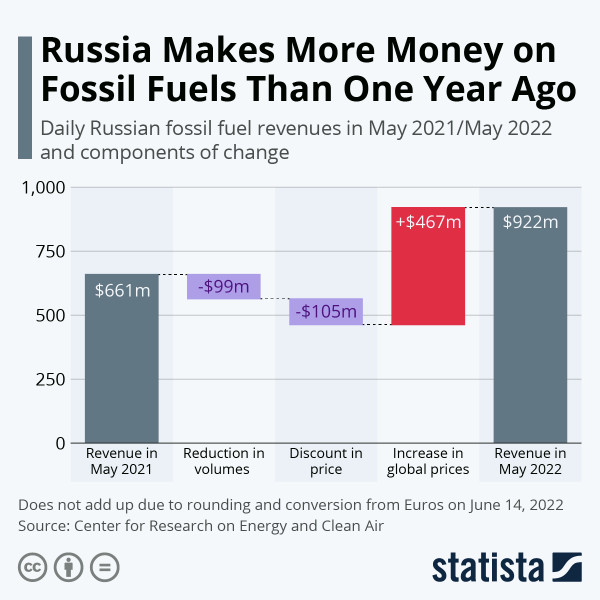 In our money, Russia has earned €93 billion from fossil fuel exports in 100 days of the war, and the unpleasant thing is that Russia's biggest customer is the European Union - 61%, or around €57 billion. The share of European countries in Russia's fossil exports is as follows: 30% coal, 50% crude oil, 75% liquefied natural gas, 75% petroleum products and 85% conventional natural gas. That is the math of war.

Looking at the countries, the biggest importer is Russia-friendly China, followed by Germany, Italy, the Netherlands, Turkey, Poland and France. Of course, further down there is Latvia too. Of course, against the backdrop of the big countries, our figures are not even worth mentioning, but Latvia, too, is importing both gas and fuel from Russia as the war in Ukraine continues.

With great and mighty boasting, the European Union has adopted the sixth package of sanctions against Russia, and it finally includes oil. Here is what the EU Council has to say about them:

"With today’s package, we are increasing limitations to the Kremlin’s ability to finance the war by imposing further economic sanctions. We are banning the import of Russian oil into the EU and with this cutting a massive source of revenue for Russia. (...) The EU decided to prohibit the purchase, import or transfer of crude oil and certain petroleum products from Russia into the EU. The phasing out of Russian oil will take from 6 months for crude oil to 8 months for other refined petroleum products. A temporary exception is foreseen for imports of crude oil by pipeline into those EU member states that, due to their geographic situation, suffer from a specific dependence on Russian supplies and have no viable alternative options. Moreover, Bulgaria and Croatia will also benefit from temporary derogations concerning the import of Russian seaborne crude oil and vacuum gas oil respectively.”

So by the end of the year, Europe will cut two-thirds of its Russian supplies. But so far the reduction is only 15% compared to the pre-war period, and this has only benefited the Russian oil business, which is largely run by European hands. 68% of Russian crude shipments in April and May were made on vessels owned by companies from EU countries, the UK and Norway. 97% of tankers are insured in the UK, Norway and Sweden. Countries that are very, very sympathetic to Ukraine and very, very condemning of Russian aggression.

CREA experts also conclude their study with recommendations for governments and large corporate buyers on how to stop financing Russia's war. All purchases from Russia should be stopped, thus reinforcing the effect of sanctions. Sanctions should also be imposed on third parties involved in the transport of Russian fossil energy. During a transitional period, if a total ban is not possible, high customs tariffs should be imposed on imports from Russia. Finally, a plan should be put in place to replace Russian fossil energy with clean non-fossil energy. Wonderful recommendations, countered by harsh realities. No, not the Ukrainian harsh reality, but the fact that, here in Latvia, petrol prices have already shot up to well over two euros per liter, which is at least partly the price of Ukraine's freedom from Russia.

Let cabbages grow instead of biofuels

The Latvian government is not doing a very good job of replacing dirty fossil fuels with clean non-fossil energy, as Finnish experts suggest. Even the small amount of biofuel - 6.5 to 9.5% - that traders have been obliged to add to fossil fuels will now be allowed to be excluded. The Cabinet of Ministers has decided to make the addition of biofuels to fuels voluntary for one and a half years - from July 1, 2022, to December 31, 2023 - which means that fuel retailers or traders who sell fuel wholesale will be free to choose whether or not to add biofuels. The government expects this to reduce the price of fuel by an average of ten cents per liter. Meanwhile, traders predict that this will not be successful, as taxes and the price of oil are the most important components of the final fuel price. And the price of oil is rising because of the war.

So, by abandoning environmental targets and adding biofuels to fossil fuels, perhaps the only benefit will be to free up arable land from fuel rapeseed, rye and triticale to grow some more useful crops. For example, cabbages.