Aivars Lembergs, as an individual, addressed the Corruption Prevention and Combating Bureau (KNAB) with a whistleblower report, asking to find out whether large-scale corrupt crimes have indeed taken place in Latvia, as the competent US authorities claim in their documents.
29.12.2020. Uldis Dreiblats, Ritums Rozenbergs 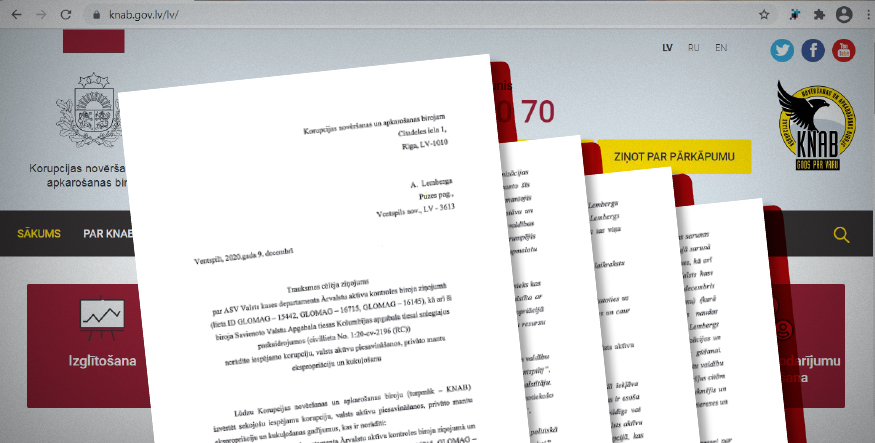 WHISTLEBLOWER STATEMENT. Ventspils Mayor Aivars Lembergs asks KNAB to investigate 43 episodes, where OFAC's Report and Explanatory Notes to the US District Court of Colombia contain allegations of his connection with crimes and illegal actions ©Neatkarīgā

Fighting for his right in the US District Court of Colombia against the statements made in the Report of the US Treasury Department's Office of Foreign Assets Control (OFAC) that Ventspils Mayor Aivars Lembergs had organized corrupt crimes, A. Lembergs addressed the whistleblower report to KNAB.

He told reporters at a press conference on December 9, precisely a year after A. Lembergs himself, two non-governmental organizations, and the Latvian state-owned port authority - the Ventspils Freeport Authority - were included in the US sanctions list.

The passing of one year since the stormy events at the end of 2019 (the loudest of them - change of the state port management model, renaming Ventspils port to Venta port, a brutal blow to transit business, etc.) was one of the main reasons why A. Lembergs turned to KNAB because, for a whole year, the harsh allegations in OFAC's Report on the inclusion of one natural and three legal entities in the sanctions list have remained simply allegations. The Prosecutor General's Office and the KNAB have informed that some investigative activities will be carried out, however, there is absolutely no information about their results.

The Whistleblowing Law prohibits KNAB from informing not only about the further progress of A. Lembergs' report but also about the fact of receiving the report itself, therefore KNAB does not provide any comments in this regard.

A year without evidence

On the KNAB website, the inscription “Whistleblower Report” is especially highlighted. You can access the message form by clicking on this label. KNAB promises to review the reports of the whistleblowers and, within three days after the decision has been made - to recognize or not to recognize this as a whistleblower report - to reply to the submitter, as well as to contact him if necessary.

Following the Whistleblowing Law, A. Lembergs asked the KNAB to discover the truth of 43 different allegations contained in OFAC's Report as well as subsequent Explanations provided by OFAC to the District Court of Colombia in response to this court's request to substantiate its sanction decision.

Allegations are false and illogical

A. Lembergs has asked to find out the truth about other false statements mentioned in OFAC's Report and Explanatory Notes:

As you know, airBaltic's share capital has not been privatized; "Unity", that in 2010, A. Šlesers and A. Lembergs' allegedly "spun intrigue" about, is still in power with different names, another "intrigue victim" former Prime Minister V. Dombrovskis holds one of the highest positions in Europe, so-called corrupted politicians and law enforcement agencies officials do not sit in prison, but who are these "individuals" from whom A. Lembergs benefits "economically" is not at all understandable, let alone what "expropriation" (forced expropriation of property in favor of the state) A. Lembergs may have carried out.

Dealing with the opposition

In his submission, A. Lembergs asked the KNAB “within its competence to evaluate the facts set out in the /OFAC/ Report and Explanatory Notes, as well as in this whistleblowing report. If illegal activity is established, please take the actions specified in regulatory enactments so that the illegal activity is investigated and the guilty persons are punished in accordance with regulatory enactments.”

As A. Lembergs pointed out at his press conference on 9 December, the allegations made in OFAC's Report and Explanatory Notes to the District Court of Colombia are an unprecedented case of defamation. "I was treated just as Alexander Lukashenko treats his opponents in Belarus. And it is not Kariņš or Bordāns who did it, but the US government. These sanctions are against the oppositionary Aivars Lembergs. It is a political retaliation!”

He regretted that the US government was engaging in domestic political struggles in Latvia against the oppositionary Aivars Lembergs: "Yes, I am in opposition to Prime Minister Krišjānis Kariņš, Deputy Prime Minister Bordāns, Ministers Šuplinska and Linkaitis. I am in opposition to the whole government and I am in opposition to the ruling coalition, but I have the right to be in opposition because I exercise the human rights guaranteed to me by the Constitution of the Republic of Latvia. I have not bought any position in politics, and if I have any influence in Latvian politics, it has been given to me only by Latvian citizens in the elections in Ventspils and the Latvian Parliament, just as US citizens have done in the United States when they want their Congress; just as US citizens have done in electing a US president; just as the citizens of other democracies have done when they want their politicians. And who can take away this status - the US government or the electorate? Remember the vigor of the appointment of a special prosecutor to investigate possible Russian interference in the US presidential election!? But is this /defamation with the aim of justifying the imposition of sanctions/ not an interference in the Latvian electoral process and in Latvian political life? Is it legal? Does it comply with the human rights defined by the United Nations, the European Charter of Human Rights, the US Constitution, the Constitution of Latvia?”

Neatkarīgā asked KNAB whether it had recognized the report of A. Lembergs as a whistleblower report; whether the KNAB will verify the facts mentioned in the whistleblower report; are the allegations made by the competent US authorities about the corrupt crimes committed not a sufficient basis for initiating criminal proceedings and when could the KNAB's decision on further action be known?

The following answer was received from KNAB to the above-mentioned questions: “In accordance with the regulation specified in the Whistleblowing Law, information on possible whistleblower cases cannot be commented on. Thus, neither the Corruption Prevention and Combating Bureau nor other public bodies are entitled to provide any information related to possible reports of whistleblowers, including whether or not certain persons have approached the institution with such a report."

Comment
The new economic doctrine of PM Krišjānis Kariņš: Transit is harmful to the Latvian economy
Uldis Dreiblats, Ritums Rozenbergs
Šlesers and Šķēle return to save Latvia's political class
BLBens Latkovskis
It is a matter of honor for Putin to take revenge on Biden
BLBens Latkovskis
The echoes of the Arab Spring can also be felt in Latvia
BLBens Latkovskis
Cibiņš has already destroyed seaports, now it is the airports' turn
BLBens Latkovskis
The Minister of Economics Vitenbergs is not scared of losing his position
Jānis Lasmanis