The alternative foreign policy of local governments will be restricted

In response to Daugavpils and Rēzekne local governments' cooperation with the Russian Federation, amendments to the Law on Local Governments have been proposed. The amendments are intended to fill the gaps that opened the door to actions that run counter to the country's official foreign policy course.
17.09.2021. Jānis Lasmanis 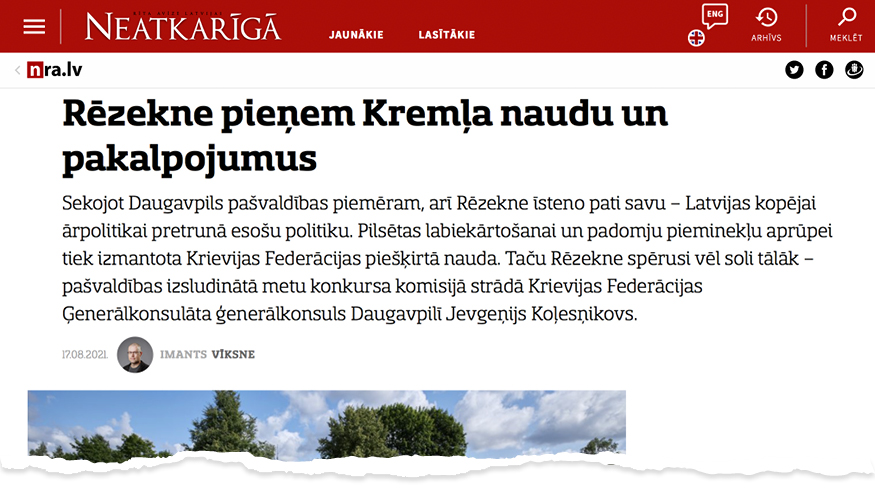 Neatkarīgā has already reported that Daugavpils municipality and the Consulate General of the Russian Federation have signed a memorandum of understanding on the renovation of the existing Soviet memorial in the city center, Dubrovniku park, at Russia's expense. Meanwhile, Rēzekne municipality has involved in the implementation of a similar project the Russian Consul General in Daugavpils Evgeny Kolesnikov, who works in the design competition commission announced by the municipality.

Considering that such practice, when local governments enter into agreements with official representatives of other countries, balances on the line of violating the law, the Saeima Foreign Affairs Committee addressed this issue by discussing the development of a unified foreign policy at the state and local government level with the representatives of the Latvian Association of Local and Regional Governments and the Ministry of Foreign Affairs.

In order to avoid the potential risks of undermining the image of the state in a similar situation, as well as discrediting its foreign policy course, which is largely integrated into the foreign policy course of the entire European Union, it has been decided to eliminate this shortcoming. Namely, in the foreseeable future, the procedure for concluding various cooperation agreements with official representatives of other countries will be clearly set out in the law. "This will not in any way jeopardize the right of local governments to conclude twinning agreements with foreign cities," emphasizes R. Kols.

At the sitting of the committee, five of the seven MPs of the Saeima supported this idea, which had been supported by both the Ministry of Foreign Affairs and the Latvian Association of Local and Regional Governments. Nikolajs Kabanovs and Jānis Tutins, representing Harmony (Saskaņa), voted against.

Asked why he did not support the desire to settle the issues affecting the state's foreign policy, N. Kabanovs said that there was no reason to approve this proposal.

"Currently, all local governments work in accordance with Latvian laws and in none of them any activity that could be described as anti-state has been identified. It seems that the National Alliance (Nacionālā apvienība), in putting forward this proposal, was guided by its own political positions and asks for unnecessary publicity for itself,” says N. Kabanovs.

He believes that Rēzekne and Daugavpils operate within their competence and the documents signed by them "are not a national event, but humanitarian with a local contribution."

It should be reminded here that the Center for East European Policy Studies has also conducted an academic study on Russia's efforts to revitalize and strengthen the so-called compatriot policy in Daugavpils and Rēzekne. It states that the strengthening of the Russian language, dissemination of cultural and historical understanding can be seen as the primary goals of the initiatives implemented by Russia in Daugavpils and Rēzekne municipalities.

In addition, both municipalities show an uncritical attitude towards Russia's initiatives, ignoring the fact that Russia perceives its cultural, humanitarian, educational and compatriot policy activities as part of the country's common foreign policy and the promotion of national interests.