Although the three co-chairs of the For Latvia's Development (Latvijas attīstībai) party are formally the leaders, the congress confirmed that the de facto leader is still Juris Pūce, who lost his post as chairman because of the scandal at the Riga City Council, and who not only outlined the party's program for the next parliamentary elections in detail, but also - unlike the co-chairs - criticized the coalition partners.
20.12.2021. Jānis Lasmanis 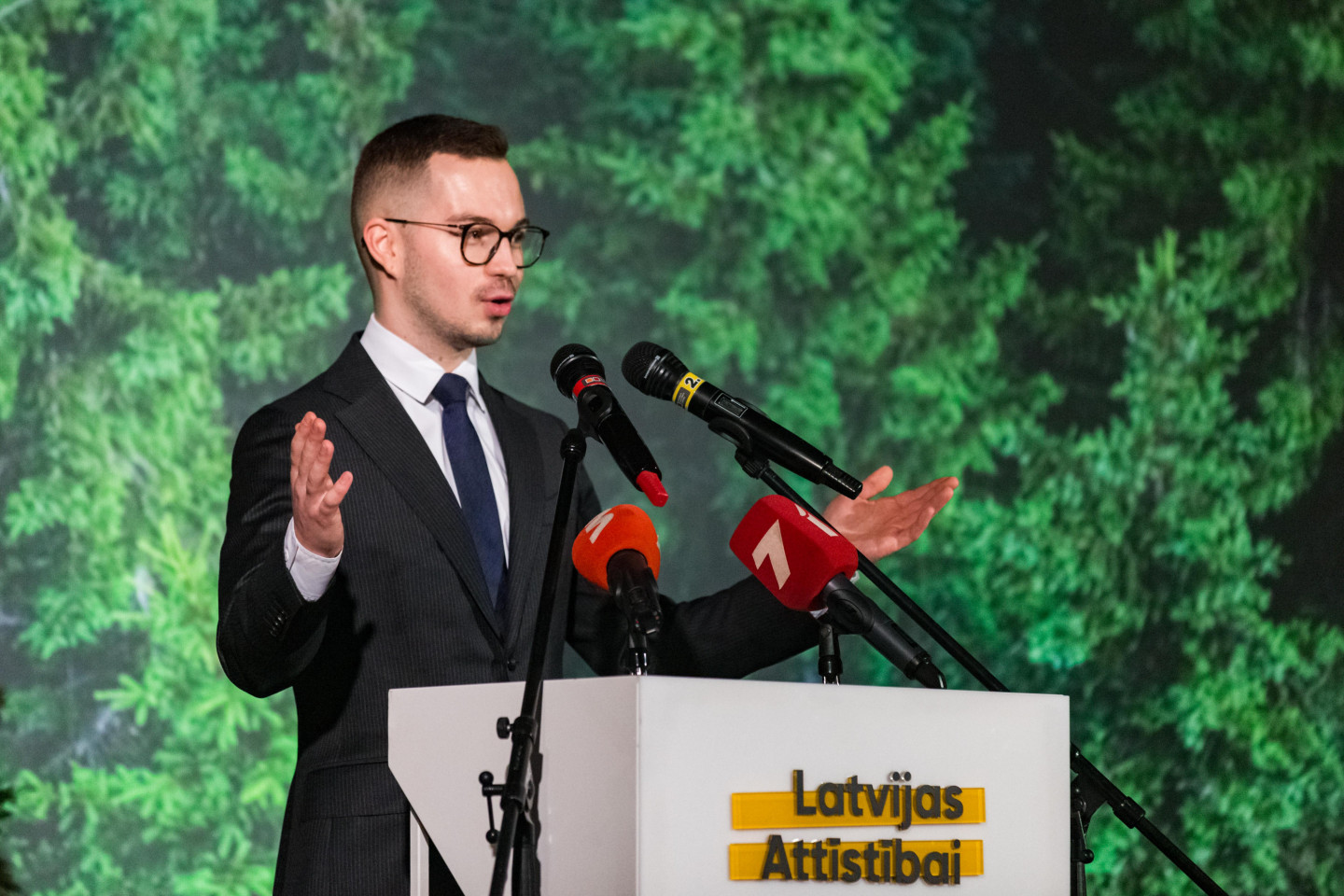 The importance of the Green Deal for the party's program was underlined by Minister Artūrs Toms Plešs: "One of the biggest challenges is still ahead of us, and time is not on our side. It's the story of climate change." ©"Latvijas attīstībai"

Without naming any of the partners, J. Pūce, addressing the congress delegates, complained that decisions that would guarantee the country's development are being held back in this government and "significant reforms in the future will only be possible if For Latvia's Development (Latvijas attīstībai) and its cooperation partner Movement For! (Kustība Par!) are responsible for their implementation".

Outlining the 14th Saeima's pre-election program, K. Pūce named the Green Deal already defined by the European Union as one of its three cornerstones. However, its implementation is already being held back by the coalition partners. "In recent months, our most timid coalition parties and some ministers have begun to express concern about whether the Green Deal will take something away from Latvia," said J. Pūce, whose statements suggest that this programmatic pillar will not be abandoned by For Latvia's Development (Latvijas attīstībai).

"Will Latvia be a part of the process or will we be left behind because of fear and indecision? The next government must be a Green Deal government that seizes every opportunity in the interests of the people of Latvia. The next four years are crucial for Latvia's growth. It will not be enough to give in to the siren song of populism, it will not be enough to do everything as we have been doing, we will have to do it better and faster, and the results can be unbelievably bright for our country," said the leader of the Development/For! (Attīstībai/Par!) party alliance J. Pūce.

Edgars Jaunups, a member of the party's board, also joined in the criticism, already openly blaming coalition partner Unity (Vienotība) for the country's failures. He listed the number of years during the last 12 years that Unity (Vienotība) has been responsible for finance and home affairs, as well as for running the government, and noted that during this time many sectors that had shown promise were now stagnating.

The importance of the Green Deal for the party's program was also underlined by the party's co-chair, Minister for Environmental Protection and Regional Development Artūrs Toms Plešs.

"One of the biggest challenges is still ahead of us, and time is not on our side. It's the story of climate change (...) The average temperature in Latvia, if we do nothing and do not act, will rise by five degrees. This is a very significant increase (...) No one doubts that the weather will become increasingly unpredictable and dangerous in the future. Every decision we take will have consequences for the lives of future generations," said the Minister.

For Latvia's Development (Latvijas attīstībai) will also focus on the education system and the regional economy. In the former, among other things, funding for teachers' salaries is still needed, while regional inequality with Riga has become even greater.

But if Development/For! (Attīstībai/Par!) come to power, the situation is bound to improve. "We do not promise the impossible and we want to be sure that we will do what we promise," said J. Pūce.