In December 2021, Egils Levits was the least popular politician in Latvia

Immediately after his election as President of Latvia, Egils Levits expressed his readiness to become the President of the entire Latvian nation, but in the past years of his presidency, he has only moved further away from this goal. Taking into account some logical and national differences, he is the most unpopular politician in the country.
13.01.2022. Jānis Lasmanis 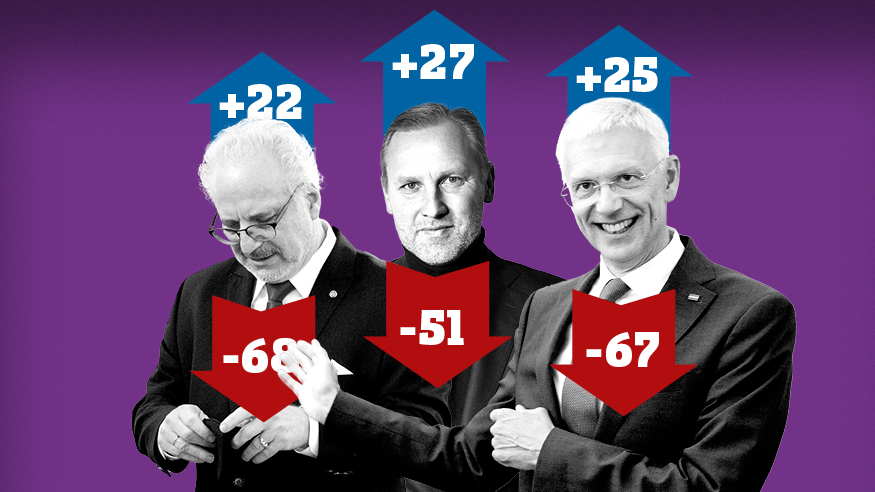 The results of the survey "Trust in State and Public Institutions and Evaluation of the Performance of Politicians and Public Officials", commissioned by Neatkarīgā and carried out by the research center SKDS at the end of each year, show that Prime Minister Krišjānis Kariņš is the most unpopular among Russian-speaking people. His job approval rating has hit a negative 58.4 rating points. E. Levits follows the Prime Minister in this rating with negative 53.8 points. 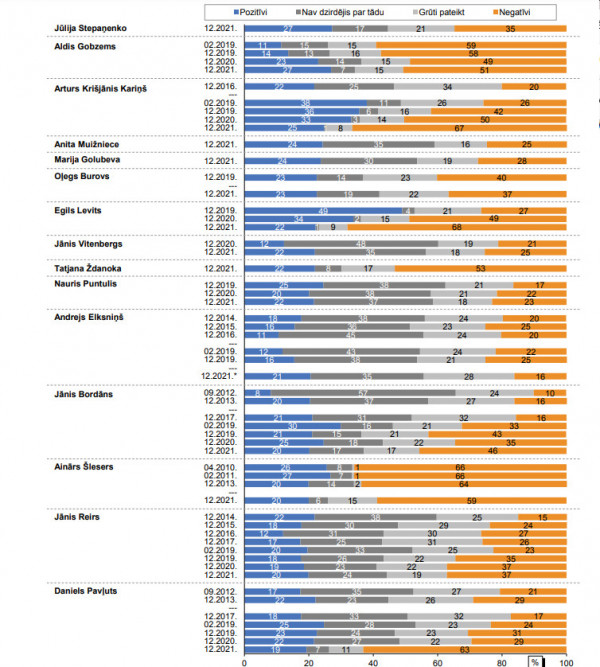 The most unpopular politicians among the Latvian-speaking population are Tatjana Ždanoka, Member of the European Parliament and leader of the Latvian Russian Union (Latvijas Krievu savienība), and Ainārs Šlesers (respective negative ratings: 60.8 and 48.4). And only then the President of the Republic follows with a negative rating of 41.3.

More unpopular than the Minister of Health

Public relations specialist and political analyst Filips Rajevskis explains these differences by the fact that K. Kariņš, as Prime Minister, is more visible in the public sphere and associated with various restrictions in the country. Among the Latvian-speaking population, T. Ždanoka has gained a negative image thanks to her long-standing anti-Latvian activities, while A. Šlesers has not been able to break his association with the previous economic crisis, during which hundreds of thousands of people fled Latvia.

Interestingly, among Russian speakers, the President, Prime Minister and Minister of Health are rated worse than the leader of the National Alliance (Nacionālā apvienība), Raivis Dzintars, whose reputation among this audience could be compared to that of T. Ždanoka among Latvian speakers.

Information space and inability to reach them

In order to get a partial explanation for the decline in popularity of E. Levits among foreigners, Neatkarīgā turned to Romans Alijevs, the director of the Riga Classical Gymnasium, who headed the Minorities Advisory Council in the Chancellery of the three previous Presidents of Latvia.

E.Levits did not renew the Council when he took office, but R. Alijevs is convinced that this does not mean that these issues are not on the President's agenda, especially since E. Levits has organized discussions on common values, on a united Latvia, in which representatives of national minorities are also involved.

R.Alijevs believes that the explanation for the unpopularity of E. Levits among Russian speakers is to be found in the separated informational environments and in the fact that many people trust disreputable information disseminators on the Internet social platforms.

"These are usually just activists on social networks, people who, unfortunately, only spread negative information about Latvia, about our society, in Russian. Because a lot depends on the interpretation. It's quite sad that everything is presented and commented on from the point of view that says, 'Look, everything is better in Russia'. This is a problem of the distribution of information space,"

says R. Alijevs, adding that not only do some Russian-speakers live in a separate information bubble, but Latvians do too.

Lelde Metla-Rozentāle, a lecturer at the Department of Political Science at Riga Stradiņš University, also indirectly points to different and strictly separated bubbles of information space, which to some extent also explains the differences in ratings.

"I don't know how well Mr Levits knows the Russian language, but I haven't seen him trying to address the Russian audience. One could say that this is Latvia and why should the President speak in Russian, but knowing the different information spaces, it might be useful if the President was able to address the audience in a way that they could hear in a language they could understand," the expert says, explaining why she believes the President has not been able to convince Russian-speakers with his performance.

Like other experts, L. Metla-Rozentāle points out that during the epidemiological crisis, Levits sided too much with the government, which had a negative impact on the public's assessment of his work.

"One would wish, given that the President has a representative role, for him to be a giver of hope, emotional support. If Mr Kariņš had to come up with rational and unpopular but necessary decisions, the President should have been the one to keep the positive spirit in society. The President hasn't been too good at fulfilling this role," says L. Metla-Rozentāle.