With extremely difficult times predicted for Latvia in the near future, construction contractor Uldis Pīlēns is gathering parties and non-partisans around him and promising to use a formula that proved successful 25 years ago to fix the country's long-standing problems and prevent new ones from arising.
11.05.2022. Jānis Lasmanis 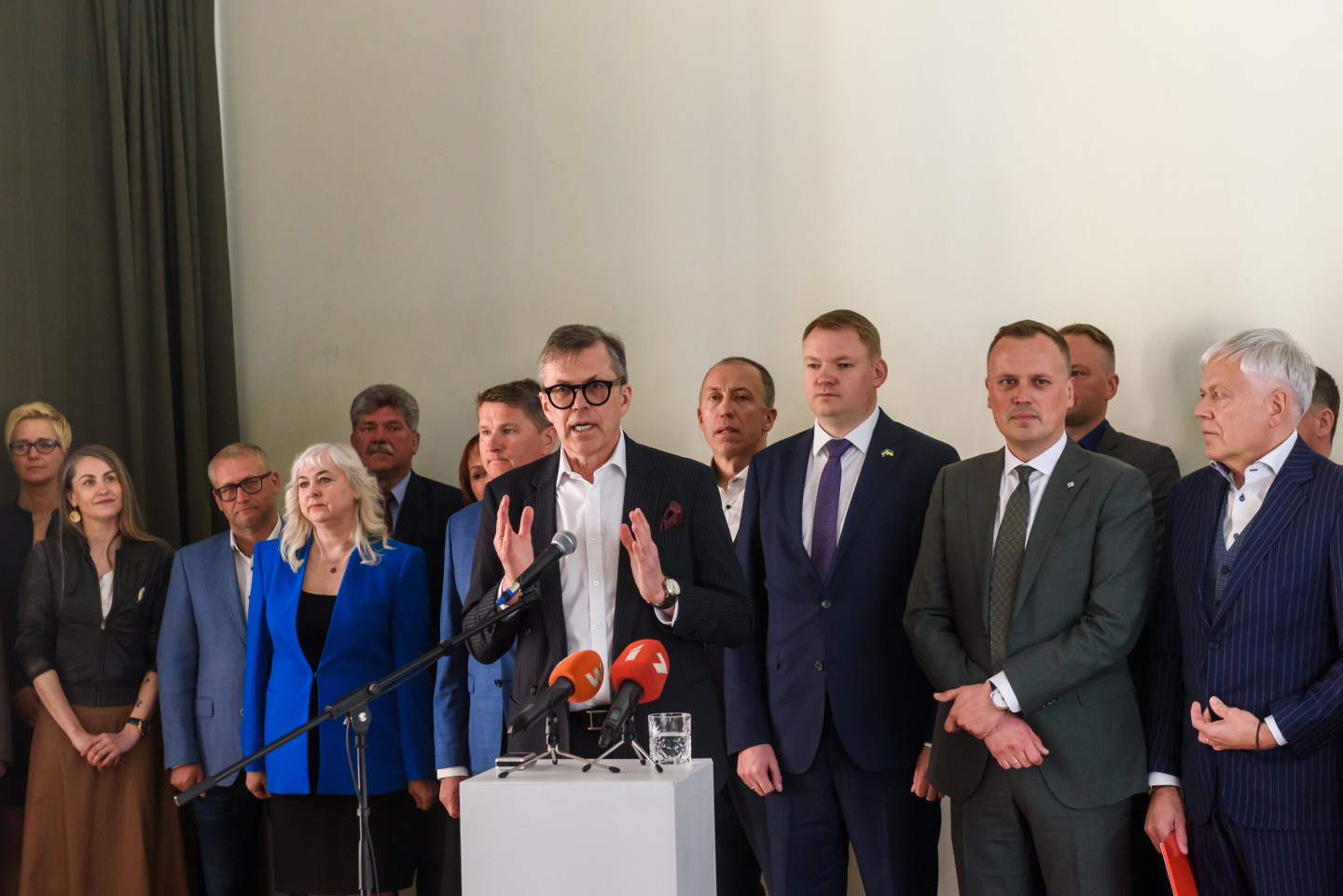 After the Russian army left Latvia, including Liepāja, the city where the wind is born, including its Karosta, was left in a sorry state. The harbor area was polluted with dozens of Soviet shipwrecks, and at times the city did not even have enough funds for lighting. This is how Uldis Sesks, the leader of the Liepāja Party and the city's mayor for more than 20 years, recalls the past 25 years ago.

In the late 1970s, Uldis Pīlēns, then a university graduate in East Germany, approached businessmen and political parties to combine their energy and knowledge to create a joint list for the 1997 municipal elections that would be able to lift the city out of its plight.

His efforts were successful: the Liepāja United List party (Liepājas apvienotais saraksts) was created. Under its banner, the Union of Latvian Christian Democrats (Latvijas Kristīgo demokrātu savienība), the Latvian Farmers' Union (Latvijas Zemnieku savienība), the Latvian Way (Latvijas Ceļš) and the Christian People's Party (Kristīgā tautas partija) took part in the elections, as well as non-partisans. The united list was the winner of the elections - the organization won nine out of 15 seats in the Liepāja municipality. He did not stand in the elections himself, but a month after the elections he became a member of the Liepāja Special Economic Zone Board and a month later its chairman.

This list of members has also given rise to the Liepāja Party, which has undeniably led the city's economic development and strength during its two municipal terms. "Liepāja's economy grew even during the pandemic, when the streets here in the Old Town were empty," says Sesks, illustrating the city's success story.

A "fixture" of professionals is needed

The idea of using an identical formula in the 14th Saeima elections came to Pīlēns at the end of last year, but he became convinced that it really needed to be implemented because of the war Russia has started in Ukraine, which, after the pandemic, is threatening an energy crisis and the social problems that will follow.

Pīlēns stresses that Latvia was already the weakest link in the Baltic States before the pandemic, but Covid-19 has only strengthened this position. The main problem is that Latvia has poor management, which prevents good ideas from being implemented at the right time.

This is a problem that Pīlēns promises to solve by again uniting non-partisan professionals and political parties under one list - the Latvia United List (Latvijas apvienotais saraksts). This would be formed by parties that have expressed an interest and have been recognized as relevant, as well as by a non-partisan association. The electoral lists will be drawn up by selecting the best of both sides, with the professionals, in the words of U. Pīlēns, being entrusted with the function of a fixture, which will allow the "concrete mass" created by the politicians to be transformed into the much more durable "reinforced concrete".

He therefore calls on the political parties to give up their personal, "small ambitions" and join forces to dedicate themselves to the development of the country, like the Ukrainians who queue up at mobilization points to go to the defense of their homeland.

The first to be approached were the old comrades, the Liepāja Party, which, after a serious assessment of the idea, agreed to it. Later, the Latvian Association of Regions (Latvijas Reģionu apvienība) and the Latvian Green Party (Latvijas Zaļā partija) also confirmed their participation in the single list, having decided to break their 20-year cooperation with the Latvian Farmers' Union and leave the jointly formed Union of Greens and Farmers (Zaļo un Zemnieku Savienība).

The leaders of these political organizations agree with Pīlēns that Latvia is facing difficult times and needs to be able to join forces to survive them with as few losses as possible or even with growth. "I don't want to see the times Latvia has already had, when people had to leave," says Sesks.

No information is currently available on other parties that have already expressed their willingness to take a closer look at Pīlēns' vision. But there are several. However, it is hard to imagine that the Latvian Farmers' Union, which has taken the decision of the Latvian Green Party to leave the ZZS quite personally, could join the Latvia United List.

So far, Unity (Vienotība) and the National Alliance (Nacionālā apvienība) have repeatedly called for a united list in the run-up to the Saeima elections.

says Jānis Iesalnieks, a member of the board of the National Alliance, pointing out that this is his personal opinion.

Arvils Ašeradens, chairman of the board of Unity, said that the information available so far on the united list is insufficient.

"We have not received such an offer. When we receive it, we will be able to answer, but nothing much is known yet, several parameters need to be understood, it is a new development," said Ašeradens.

A check-up with the posts is inevitable

When thinking about a very broad alliance of parties, it should not be forgotten that so far the parties have shown that, despite their common slogans, posts are very important to them. For obvious and logical reasons. Without posts, it is harder to get media attention and grow the political capital needed for the next elections.

One of the most striking examples in the recent history of Latvian politics is the extraordinary elections of the Riga municipality, after which the nominal winners - Development/For! (Attīstībai/Par!) - were forced to introduce three vice-mayor posts in order to form a stable coalition out of four lists.

The same challenge for the project inspired by Pīlēns will be the creation of electoral lists and the selection of ministerial and prime ministerial candidates.

At the moment, Pīlēns says that the Prime Minister-designate of the future list will be selected through a collegial process. Each of the parties, including the non-partisan association of professionals involved in the creation of the joint list, will be able to put forward a candidate for internal discussions on the prime ministerial candidates.

So far, one candidate for Prime Minister of the future alliance of parties is known - former Prime Minister Māris Kučinskis, representing the Liepāja party. Neither Edvards Smiltēns, leader of the Latvian Association of Regions, nor Edgars Tavars, chairman of the Greens, have yet named their candidates.

Pīlēns, who will be one of the founders of the association that will complement the party alliance, will not take part in the Saeima elections. This would complicate his business too much. When asked whether he would run for the post of Prime Minister, his answer gave the impression that, as a co-founder of the association, such a possibility certainly existed.